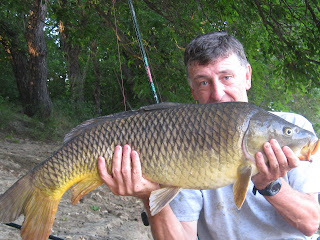 While RI carp fishing is good overall, some of the best carp fishing in the US takes place a little over an hour away from here at the Merrimack River. When I'm looking for action with "big" fish, I head to this place.

Yesterday I arrived at the river about 11 AM and started to slingshootcorn into the river. Immediately, I had bangs and within 20 minutes, I had a 15 lber. on the bank. That would be the SMALLEST fish I would land on this memorable day. Good days in the past would see 5-8 fish caught. Today was phenomenal. When I left the river at 6:45 in the evening, the fish count totaled 18 common carp landed along with 2 breakoffs. I had 3 fish over 20 lbs. with the biggest going 22 lbs. (see photo). At one point, two alarms went off at the same time and that produced chaos, but in the end it also produced a 17 and 20 lb. carp. Most of the carp were in the 17-19 lb. range. It was the best day I ever experienced along here.

I was using my typical set up. I used my "big" rods, DAM 11 1/2 foot carp rods along with big Shimano 4500 Baitrunners. I used 17 lb test line and 20 lb test leaders. The only way to fish this place is with big stuff. You are fishing for big fish in a big current. I used 3 oz. inline leads, standard sinkers in this spot. Bait was corn on the hair rig ahead of oatmeal method mix, about the best combination.

It was fabulous fishing here, but not unusual. I have never had a bad outing along here. It is as close to a sure bet as you can get in fishing!
Posted by Dave Pickering at 11:00 AM No comments: 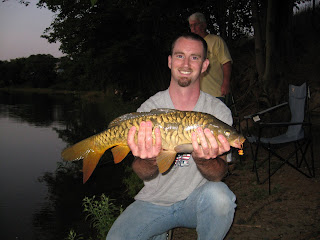 We held our late summer fish-in on Aug. 22 at Scott's Pond and it was a big success. We had about 12 fishermen attend, good numbers for a RI fish-in. We had kids from the neighborhood, Charlie and Jeff Allard, Steve Barbato and his son and friend, Steve, Steve Mc Kenna, and Chris, Vinny and Jerome from MA along with myself.
We landed 9 mirror carp and 1 common. The fish were on the small size, all less than 10 lbs., but many fishermen caught their first mirrors ever! Our goal was to fish for mirrors and catch some. Don't be fooled....if you return to Scott's, there are good numbers of mirrors in this pond that weigh over 15 lbs.
Best fish of the day went to Al Lannon, a neighborhood kid who landed a mirror of 8 lbs. The hottest team was the father/son team of Jeff and Charlie at peg 4. Using corn on a hair rig ahead of an oatmeal method ball, they landed 3 mirrors.
While many fishermen left at dark, the few of us who stayed were treated to better action and mor runners as the after dark fishing was definitely more productive than the daylight fishing.
Posted by Dave Pickering at 10:50 AM No comments: 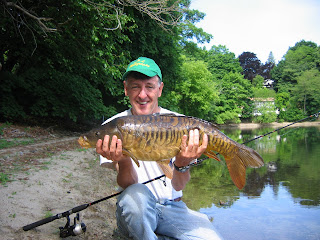 Our second fish-in of the year is scheduled for Scott's Pond in Lincoln, RI. We will be fishing from 6:00 until after dark along the Walker St. shoreline at the south end of the pond. Directions and additional information can be found at the Carp Angler Group website on the Forum under the New England thread. Fish-ins are generally informal get-togethers where information and techniques are shared as anglers fish a shoreline together.
Scott's Pond is almost in my backyard and I know the pond like the back of my hand, and I've caught hundreds of carp here. It is regarded as the very best mirror carp pond in the state and mirrors outnumber common carp 10 to 1 in this pond. The average mirror here runs 6-12 lbs., though I have taken mirrors up to 18 lbs. in this pond (see photo). Some fishermen believe the biggest mirror in the state resides here.
A number of baits work with corn and doughballs being the best. Corn is best fished on a hair rig ahead of an oatmeal method ball. Doughballs can be fished on a hair rig or packed around a hook and freelined. Best times to fish are evenings, early morning or on rainy days.
Posted by Dave Pickering at 10:50 AM No comments: