Trekking Through the Snow for Carp 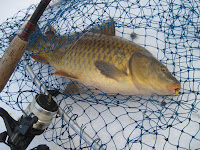 Today was quite the challenge. After skiing and shoveling snow for the last 5 days, I was ready for a break. My first thought was to go ice fishing, but all that melting snow and rain that fell on the ice in the last two days made me wary of it. I never liked going on snow covered ice that has a layer of water underneath it. So, it was a simple choice....I'm going carp fishing.
I picked a spot in which I had to walk a distance though the woods to open water in a river. The trek was brutal. There was about 15 inches of snow in some spots with a crusty top. When I got to my spot, the shoreline had ice out to a short distance. My strategy (if I was lucky enough to catch a carp) was to get the fish to the edge of the ice and then haul it up and slide it to shore. Well, to my surprise, I did not land one carp, but landed 2 (see photo of one fish at right) and the ice slide worked beautifully. I also last another fish right near the ice. The hits were very subtle and there were no screaming runs, but the fish offered a decent fight once hooked. I was using my favorite winter bait, pineapple flavored sweet corn.
Yes, carp can be caught in the dead of winter.
Posted by Dave Pickering at 2:56 PM No comments:

My first big carp fishing seminar of the year is in Worcester, MA at the DCU Center as part of the ASA Eastern Fishing and Outdoor Expo. My carp fishing seminar is called Secrets of NE Carp Fishing and will take place at 1:15 on Friday, Feb. 11. It is a tell all PowerPoint show that features tackle, tactics, bait and places to fish. As a bonus, I have a bunch of North American Carp Angler magazines ($5 value) to give away courtesy of the Carp Anglers Group.
This outdoor show is one of the biggest in New England and features exhibitors and tackle reps from all over the US and North America. They will have all the latest in equipment for fresh and saltwater fishing. I contacted the St. Croix reps and they will have their new carp rods from St. Croix on display.
For those interested in saltwater fishing, I will be doing two striper fishing shows later in the day that feature shore fishing for striped bass.
For more information about the show, visit their website at http://www.sportshows.com/worcester/index.html
Posted by Dave Pickering at 5:41 PM No comments: 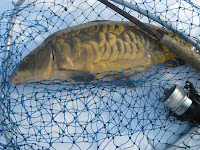 Nothing like a few carp in Jan. to cure cabin fever. I went out scouting around this week and baited up some spots that had open water. Looks like I picked the right spot to fish today as I came away with 2 commons and a mirror today, my best Jan. outing. Take a look at two of those fish sitting in the net in a pile of snow.

I would never have believed I would have caught a fish today. Snow covered the shoreline, there was some ice alon 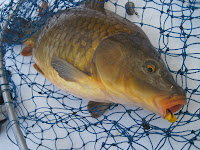 g the edge of the water, and it stayed below freezing as I sat in a pile of snow watching my lines. Yet, the fish were active. Oh, there were no screaming runs but lots of taps and gentle takes, typical of carp feeding in cold water. As usual, pineapple flavored sweet corn (no method) hair rigged on small hooks did all the damage.

Yes, carp can be caught in January for any nut who wants to get out and try.
Posted by Dave Pickering at 5:48 PM 3 comments: 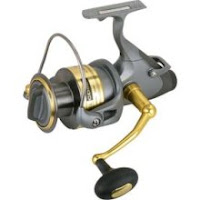 The reel is the most important component of your carp fishing tackle. If you intend to fish seriously for carp, you must have a baitrunner reel. These reels generally have a freespool lever in the back that when flipped forward, it allows a fish to take out line (little or no resistance) while the bail is flipped. Once the line is moving, pick up the rod and reel and turn the reel's handle to put the reel in gear and let the drag take over.
Many companies make these reels. Buying a quality reel is the key here. Years ago, Shimano had the market sewn up with its 3500, 4500 and 5500 reels. It made a stupid decision to discontinue these workhorses and go with an overpriced upgrade. Their new reels, named the Baitrunner D series, are selling for about $170, nearly double the price of their old versions. I suspect the quality is still there, but few fishermen are willing to shell out that amount of cash for a freshwater reel. There are some other quality reels out there at reasonable prices. The Okuma Coronado (see photo at right) gets very good reviews. These reels in a size CD 55 A and CD 40 A sell for $65 at Bass Pro and would have to be rated as a "best buy". I've used an Okuma Avenger for years and would rate the Okuma reels as top quality baitrunner reels. Daiwa also has their "Regal" line of baitrunners. I don't know anyone who uses them, but they also get good reviews. If you are looking for a long casting reel, take a look at the Daiwa Big Pits. New World Carp has them. They are not cheap, but are a specialized reel that many top anglers favor.
My advice is to avoid any of the inexpensive, no name reels. These usually sell for $20-$50 and often have trouble with the drags, free spools and anti reverse systems soon after being purchased. There is not much difference in price between the bargain reels and the name brands (Daiwa and Okuma).
Posted by Dave Pickering at 6:45 AM 1 comment: