I'm off to a hot start as this January has been  the best in terms of numbers of carp that I have ever had. It's been mild, maybe the warmest January we've ever had. Most of the month has seen little ice, and many places have been open for a good part of January.  That favors carp fishing. The warm weather has also allowed me to get out on a lot of days, double what I normally fish in January.
I've landed over 80 carp this month, by far better than any previous January. Here are my January numbers for recent years: 2017-17 fish, 2018- 4 fish, 2019-23 fish. I've also gotten out 11 days this January.  In the previous three years, the most days I have been able to fish has been a mere 5 days.
What's interesting about this January is that I have been able to catch these fish in a number of locations in both MA and RI because open water has been all over. My hottest bait has been a combo bait of one piece of artificial, white corn along with a kernel of sweet corn with a method ball packed around my sinker.  A few times, the cage feeder along with just sweet corn has worked better, but it has not been as effective as in past years.
So, it's onto February, another difficult month in year's past, but looking good for this year.  For the next two weeks, the temperatures are supposed to be way above average.  That means more water opening up and more active carp.  Looks like another good month for carp fishing is on the way!

Posted by Dave Pickering at 3:06 PM No comments:

The most recent article I've written for the magazines is in this month's January edition of The Fisherman magazine. It's a carp article, and it is titled, "Cold Carp: Score Some Winter Gold". While I have written bits and pieces about winter carp fishing on this blog, this is the complete edition from rigs to equipment to baits to location. It's everything you need to know about carp fishing in the dead of winter. Check it out.
The article comes at a great time since this has been for me the best January of carp fishing I have ever had. I've often said how the weather goes, goes the carp fishing, and this has been a January to remember for the warm weather and the fishing. Open water is everywhere.  I drove by Indian Lake ( a carp hotspot) in Worcester the other day, and there was not a sliver of ice to be found. I've never seen that in January. It's the same here in RI, and it's got the carp in a spring feeding mode. We all know this won't last, but it has been a fun ride so far in January if you are a carp fisherman.
Posted by Dave Pickering at 3:31 PM No comments:

If you wouldn't know it was Jan. 12, today could have passed for May 12! The temperature hit a record 70 degrees, and it had the carp active and in a spring mood. I got out this afternoon in one of my favorite spring spots here in RI. Right away, I saw some carp whirling, another jumped right out of the water in front of me. Yes, they were active and enjoying this false sense of spring.
They were also hitting. In a couple of hours, I banked 6 fish and had another on. They all fell for my hair rig that was baited with one kernel of sweet corn along with a white, artificial corn. The fish were also active on the fight and hit. I've landed quite a few carp thus far in January prior to today.  But, all those sluggish fish just picked up the bait and tapped the rod tip on the hit.  These fish today zipped off with the bait and had the alarms humming.
We've got a couple of days more of above normal temperatures before we hit the skids toward the weekend. Looks like a good few days coming up of carp fishing in January here in RI.
Posted by Dave Pickering at 3:47 PM No comments:

We were well represented here in RI  again this year at the National FFF (First Fishing Folly) Tournament. This event was held all over the country on New Year's Day.  At least 50 CAG members went out and fished for carp on Jan. 1.  These guys and gals landed a grand total of 86 carp weighing a combined 733 lbs.! Who says carp don't hit in the dead of winter? Certificates were awarded in a number of categories.  Two of our most accomplished RI carpers, Kevin Miller and Todd Richer, ended up winning or placing in a number of categories. Congrats guys!
I did try but came up empty.  I fished in the place I fished last year where I was so successful.  Not this year. Just not that easy to catch a carp in January, but it can be done.  Just take a look at Kevin's and Todd's certificates. 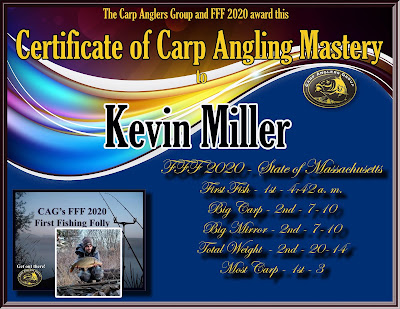 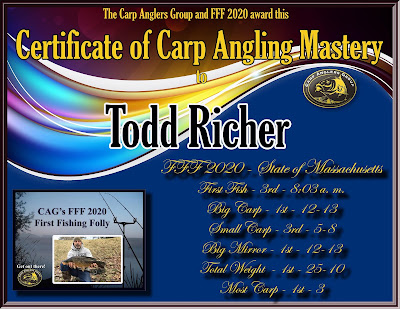 Posted by Dave Pickering at 3:02 PM No comments:


Posted by Dave Pickering at 4:05 PM No comments: