In the next month, I will be taking my carp fishing seminar on the road to some of the biggest outdoor shows in the northeast.
On Feb.8 (5:00 PM) and Feb. 9 (2:00 PM) I will be doing my "Secrets of New England Carp Fishing" seminar at the New England Fishing Expo at the DCU Center in Worcester, MA. This is one of the biggest fishing shows in the northeast and features exhibitors, continuous seminars, tackle companies, outfitters and more. For more info, visit the website at www.newenglandfishingexpo.com
On Feb. 22 (no time yet), I will be doing that same "Secrets of New England Carp Fishing " seminar at the Springfield Sportsmens Show at the Big E at Springfield, MA. This show features everything you want to do in the outdoors from hunting to fishing to water sports and more. For more info, their website is www.osegsportsmens.com
My seminars are Power Point presentations and are geared to beginners as well as experienced carpers. The carp fishing seminar outlines everything you need to know about carp fishing in southern New England..... information about carp, gear, rigging, baits and places to fish. In the past these seminars have been very popular.  In addition, this year I also have a limited supply of the special edition of the NACA (North American Carp Angler magazine) that I will be handing out at my seminars.  Well worth coming to the show just to get the magazine!
Posted by Dave Pickering at 6:19 AM No comments:

I just read an interesting article in the latest edition of the North American Carp Angler magazine which is given to members of the Carp Anglers Group (by the way....worth joining just for the magazine!).  In the article "Sharpening the Senses" excepts from the Jawadyna report are quoted.  This report or study looked at a number of variables such as a carp's taste preferences, color preferences and sound preferences in regards to baits they might take.
As far as color, the report concluded that carp preferred warm colors when selecting boilies to eat. Of five color choices of white, blue, pink, yellow and orange, the carp's top choices were pink followed by orange.  No other color came close.
This confirms my own experience with fishing with boilies.  Last summer and fall I was using a lot of combo baits with one of those baits being a Mistral 6 mm floating boilie.  These boilies came in a variety of colors, yet my top producers by far were pink and orange.  I had absolutely no success when using a purple or green boilie and little success with white or yellow.
So, if you are thinking about bait for the upcoming season, consider color as one important variable.  Yes, it does matter at times.

Artificial baits have made a big appearance in recent years on the carp scene.  There are many fishermen who think these baits are just as effective as the real thing.  Recently I tried out some Berkley Gulp artificial corn.  This bait is sold locally in many stores like Dick's, Bass Pro and Cabelas.
This corn is a soft, spongy artificial that comes in a variety of colors. I was using a chartreuse.  I used it on a hair rig in combination with a kernel of sweet corn. Yes, I did catch some carp with it.  However, my other outfit had a real kernel of maize along with a kernel of sweet corn, and I did equally as well with the real stuff.
Once spring comes along, I plan to pursue this a lot this year.  I especially like the idea that you can buy this corn in a floating variety.  Floaters, or pop-ups, tend to give the bait some lift and buoyancy in the water which the carp find very attractive. I had very good success last year when using small floating boilies in combination with another bait.  I think that is where this artificial corn will be very effective.
As an aside, I was on a big European Internet carp store today named Harris Sportmail.  Guess what their number one most popular artificial bait is......Berkley Gulp Alive floating artificial corn!  I can tell you that if the Euro guys are using it, it must be real good.
Posted by Dave Pickering at 11:23 AM No comments:

I had another good day of carp fishing today with good numbers of fish, but the fish that made my day was a rare, wild goldfish.  I've probably landed only one of these that I can remember, and that was many years ago.  At first, I thought I had a small common, but on closer inspection, I knew I had a different fish.  This fish had a regular mouth that was in the middle of its head and not underneath like a carp.  It also had very small gold scales on its back and shimmering white scales on its belly with a touch of orange near the head.  It  had a head with no scales, a giveaway that I had a goldfish and not a common carp.  The fish was about a foot long but was as wide as a small frying pan.  It was gorgeous! 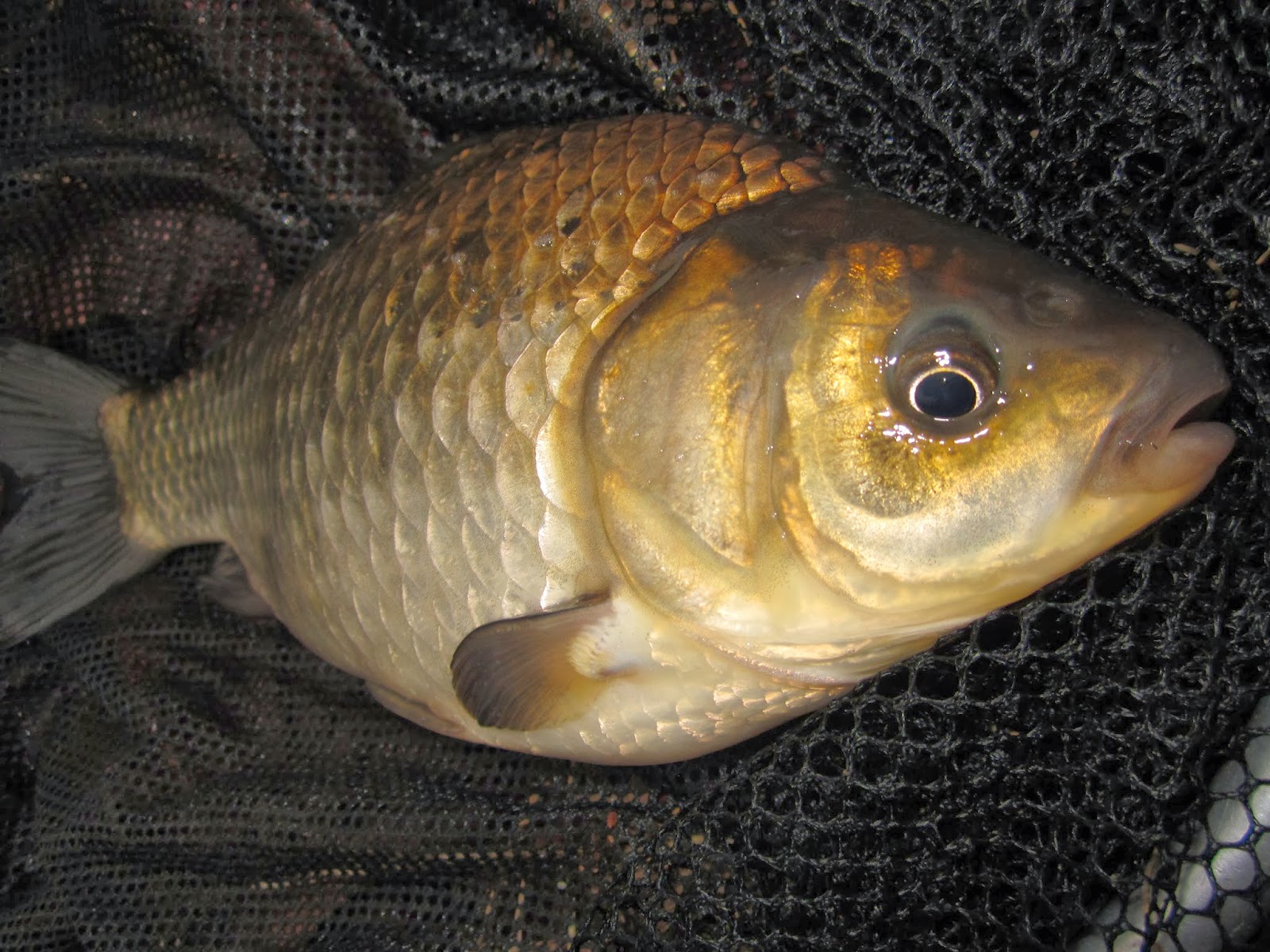 Today, on this rainy and warm day, I had one of the very best winter outings I have ever experienced.  Most of you know I love to fish in this nasty weather, and I have had some very big outings in the past in this weather. January is a tough time to fish for carp in the best of weather days.  I have fished two times earlier this month and blanked. So, when I left the house this morning, I would have been happy to land one or two fish.
I landed a whopping 14 carp. The haul included 11 mirrors and 3 commons.  While most of these fish went 4-8 lbs., I had three fish over ten pounds including a good size mirror that tipped the scales at 17 lbs. I even had a double as the first fish of the day turned out to be two fish, a mirror and a common, that hit at the same time on the two outfits I was using. The fish were all caught in open, ice free water, and all the fish fell for a combination of one kernel of maize and one kernel of sweet corn fished on the hair rig. In addition, I used an oatmeal based method ball up ahead of my hair rig.
With this warm spell wiping out the ice in many places, look for carp fishing to perk up in many spots around the state and in nearby MA.  Most river spots with current are free of ice right now and many small ponds should be ice free by late in the week.  This is a window of opportunity to get out and catch a carp in the middle of winter.

One of my carp that I landed in December on a snowy day here in RI has become Big Carp Tackle's Carp of the Month for December.  Big Carp Tackle, www.bigcarptackle.com , is a big online carp store and sponsors a monthly photo contest for CAG members.  The photos entered are usually self portrait shots taken with the self timer on the camera.  I got my photo by mounting the camera on a bankstick topped with a Gardner camera mount and set the timer for 20 seconds. With the snow lightly falling and in the background, it turned out to be a good shot (see photo at bottom).  Big Carp Tackle awards a very generous gift certificate to the monthly winners.
Besides running fishing contests, the Carp Anglers Group (CAG) is constantly running photo and writing contests for its members.  These contests are often sponsored by big online tackle companies. This month's contest, for instance, is about your funniest carp story.
For anyone interested in joining our group, membership information can be found at www.carpanglersgroup.com  If you join the national group, you have automatic membership in the state group. 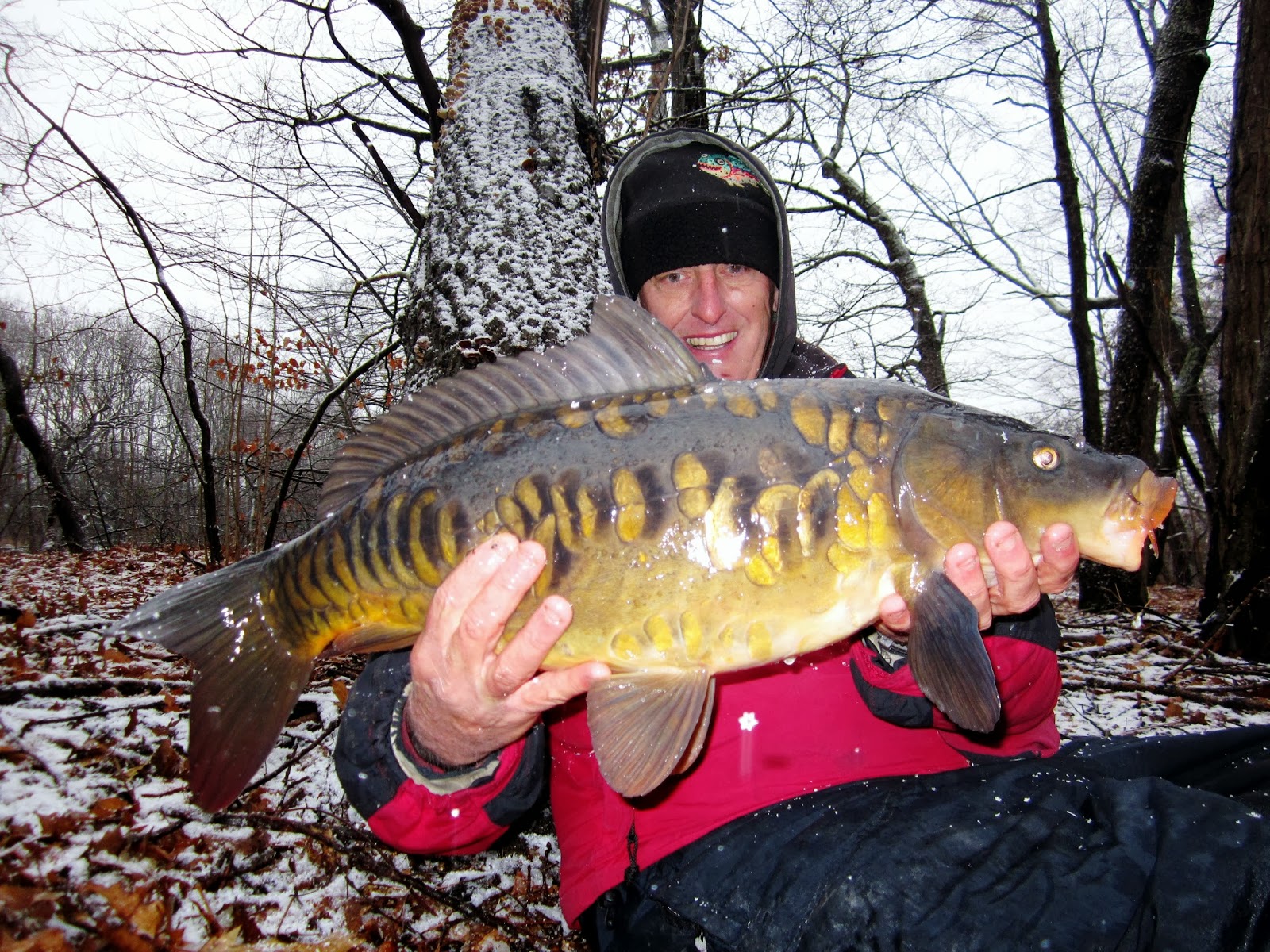 Posted by Dave Pickering at 3:40 PM No comments:

I've finally gotten around to counting my fish and closing out my logbook for 2013.  I would rate 2013 as a "good" year overall.  I caught less fish than the last two years, but I did have a lot of quality fish.  It was also a year that was greatly influenced by the weather which was hot in the summer and cold, snowy and icy in the winter, making for difficult fishing at times. Here are a few highlights of what happened:
Numbers:  I landed 620 carp in 2013.  There were 428 mirrors and 192 commons.  Back in 2011 and 2012, "excellent" years, I had over 700 carp each year. Realize, though, I set a goal of 500 carp every year so no complaints from my end.
Big Fish: My biggest carp of the year was a 33 lb. mirror.  I also had a 31 lb. mirror.  I believe I had a 30 lb. common, but did not weigh it.  I had another common that hit 28.5 lbs. and the other common (30 lber.?) was bigger.  I also had good numbers of 25-29 lb. fish, sizes I consider very big for RI.
Most Memorable Fish:  It was actually two fish.  I hooked into a double as both alarms went off at the same time. This was a monumental battle trying to get these fish ashore as I was fishing all alone.  The small fish weighed 31 lbs. and the big one weighed 33 lbs. I don't think this will every happen again in my lifetime.
Rewarding Year: This was a year that I introduced more RI fishermen to carp fishing than any other year. The interest in RI is very high, yet most non carp fishermen don't have a clue as to how to do it.  I showed more fishermen the nuts and bolts of carp fishing this year than any other year, and I met a lot of new friends along the way.  Most of these guys turned out to be good, conservation minded fishermen.  Most of them also landed multiple PB's (personal bests).  It's great to see carp fishing taking off in RI.
Posted by Dave Pickering at 7:13 AM No comments: 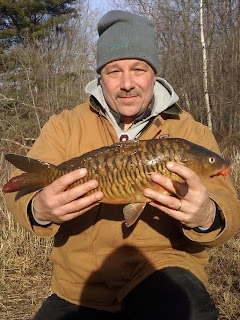 Every year the national Carp Anglers Group (CAG) runs a nationwide contest on Jan. 1 called the FFF (First Fishing Folly).  Basically, CAG carp anglers from all over North America go out on Jan. 1 to try to catch a carp. There are prizes for various categories from first fish to largest to smallest.
It's no easy task in New England to catch a carp at that time since most of our carp waters are covered in ice.  Yet, one of our RI CAG anglers did go out and caught not one, but two carp on Jan. 1.  Todd Richer, one of our newest members, landed a common (4 lbs.) and a mirror (5 lbs.) on Jan.1 fishing open water in  20 degree temperatures.  His mirror is currently  in second place for the largest mirror caught in  the FFF. So, congrats Todd on your achievement.  Not easy to do!

Posted by Dave Pickering at 8:52 AM 2 comments: