Video on How to Hair Rig Corn

This beginner video shows how to thread corn onto a hair rig using a baiting needle. I like to use three kernels of corn (either flavored maize or sweet corn) on my hair in most cases. The corn is placed on a baiting needle, the needle is hooked onto the hair and the corn is slid forward. It is all held together with a hair stop, a small plastic piece.

Posted by Dave Pickering at 5:23 PM No comments:

Today was a day I almost did not fish. It was raining, cold and windy with temps in the mid 40's. My most productive pattern in March had been fishing on those warm and sunny days in the 60's. However, you just never know when these fish will be in the mood. In the past, these lousy days have been good.
The fish were in the mood today. I landed 8 decent sized commons today for my best March outing to date. The big change I made in my fishing today was to go with Big Time Banana flavored maize from The Bait Stop. Flavored sweet corn had been a hot bait for me in recent outings, but today they wanted no part of it. I started off with two rods baited with sweet corn on one and banana maize on the other. After five fish in a row on the banana, I was sold and baited the other with it. Almost instantly, I landed a fish on the other sweet corn rod.
Last year banana maize was hot in early spring. It's looking like it will be hot again.
Posted by Dave Pickering at 2:38 PM No comments:

Weather and Fishing Heat Up 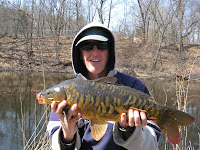 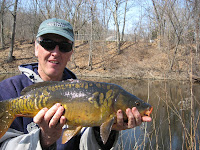 There has been a big uptick in the fishing this week. With the last three days in the sixties, it looks like the consistent fishing has arrived. I'm seeing more fish and catching more fish as the warming water temperatures have gotten the fish more active.

I got out this afternoon in one of my early season "small" spots that features shallow water and small mirror carp (under 10 lbs.). In a couple of hours, I landed 7 mirrors and had several more on. I also saw a lot of fish moving around. Prior to today, I had fished this spot several times and got exactly 1 fish. The hot bait was Big Time Banana and Wild Berry Sweet Corn from The Bait Stop. This bait was fished without a method ball.
Posted by Dave Pickering at 12:37 PM No comments: 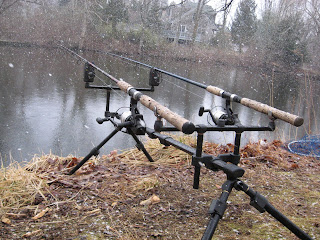 March brings its challenges to carp fishing. Ice cover is leaving, the water is cold and the fish are generally not in full feeding mode. Add to that some ever changing weather that will feature sixty degrees one day, in the thirties the next. One day it's raining; one day snowing.
So, how do you play it in March. As you've read in previous posts, I like to fish shallow areas in ponds that tend to warm up quickly. I also have my favorite spots in March that I've discovered from putting in a lot of time over the last ten years. I also like to move around a lot and hit multiple spots in a day hoping to find a good location. If you can pick your days to fish, get out on some of the warmest days or right after a warm spell. We hit a little spurt of good fishing this week while we had sunny days near sixty. But, yesterday (temp in the 40's) I blanked without a hit.
I just like to fish in March regardless of the weather. It's the start of a new season which adds to the excitement even though the fishing is usually less than stellar. And, that anticipation that it will only get better keeps me coming back for more.
Posted by Dave Pickering at 6:10 AM No comments:

First 20 Pounder of the New Year! 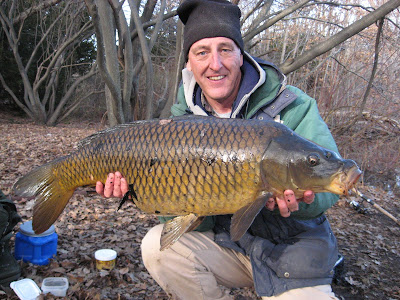 It was all big fish today with three lumps from 13-20 lbs. The hot flavor was Wild Peach Sweet Corn from The Bait Stop. It has been the hot flavor of the week. This is my first RI 20 lber. of the new season.
Posted by Dave Pickering at 6:08 PM 1 comment: 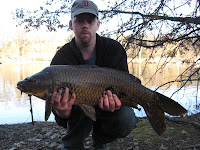 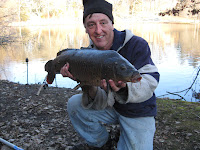 Just as the weather has heated up, the carp fishing has also. Today was my best day of the season as I landed 6 carp in a couple of different spots.

I met up with Nick Newton, a fellow RI CAG member, in a no name pond in East Greenwich. Fish were cruising all over and I managed to land 4 small ones, all about 5-6 lbs. Nick had a couple on and lost them in close. Later, we hit a bigger pond in Providence where we took 4 decent fish of 12-13 lbs. The hot bait today was flavored sweet corn. I was field testing a new raspberry flavor called "Wild Peach Berry" from The Bait Stop and that worked exceptionally well. I landed all my fish on that bait. Nick was using carpquila sweet corn and banana maize. He got the largest fish (right) on Big Time Banana maize from The Bait Stop.

Hopefully, this is the start of a good run here in RI.
Posted by Dave Pickering at 5:29 PM No comments: