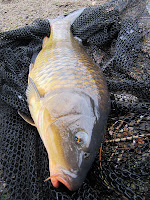 I've been out carp fishing four times in the last week and a half, fishing both shallow water ponds and river currents. I caught fish every outing, getting a mix of mirrors and commons. Today I landed two seven pound commons (see pic). This is real late in the year for fish to be active in the ponds here in RI.  However, thanks to the warm weather, there is not a sliver of ice anywhere in all the places I have been.  In fact, I stuck a thermometer in the water today and it read 45 degrees.  Incredible for Dec. 28.  Note that last year at this time you could ice fish on some of the ponds, and a foot of snow covered the ground.  What a difference a year makes.
The fish have been hitting pineapple flavored sweet corn, my go to bait all fall.  I will admit that the fish are sluggish on the take and sluggish on the fight due to the cold.  But, hey, it's Dec. 28 and carp fishing is still going.  Can't beat that!
Posted by Dave Pickering at 1:08 PM 3 comments: 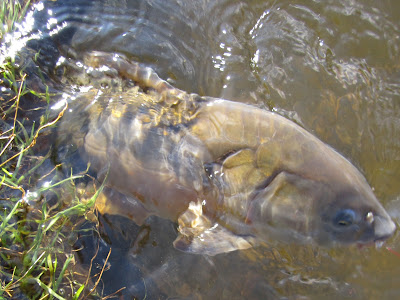 I came across this article:  http://www.fieldandstream.com/blogs/flytalk/2011/12/2012-year-carp The guy who wrote this is a blogger for Field and Stream, about the most mainstream magazine you could find.  The writer, a fly fisherman, would like to make 2012 his Year of the Carp.  He talks in glowing praise about catching carp on the fly rod, a far greater challenge he claims  than catching trout or bass on the fly rod.  Carp fishing is a sport that many fishermen around the country are now discovering and embracing.  Many of the magazines are running features on fishing for carp.  I guess they are no longer considered an "invasive species" in most parts of the country. Gee, with all the carp here in RI, maybe many of the fly rodders who only target trout should give this a try after trout fishing dies out. Just think, you could catch carp just about all year long here in RI.  Think about the fight of a 20 lb. carp on a fly rod in a river current. Yikes! Realize, too, that we have about the best fishing for mirror carp in the entire USA right in our backyard (are you paying attention RI DEM) in the Blackstone River system. Many carp fishermen around the country are envious of what we have here in RI. So, my message here is that we have a fantastic underutilized resource right  here in RI that is waiting to be discovered.  Hopefully, 2012 be your Year of the Carp.
Posted by Dave Pickering at 6:08 PM No comments:

Switch to River Currents Pays Off 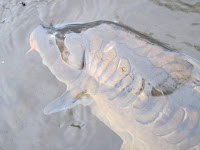 Unless we have a real warm spell, I am done for the year with fishing in  ponds and lakes.  I blanked my last two outings in ponds so it was time to look elsewhere.  In the past at this time, I have done much better at fishing oxygenated river currents where the fish are far more active.  These are spots that have deep but moving water.  Places below a waterfall are ideal places to try.  Of course, moving water does present some problems.  Foremost, you might have to increase you sinker size to hold bottom.  You might also encounter more snags since river currents are always moving around trees, branches and junk.

My move to river currents paid off today as I landed 6 mirrors  and 2 commons in an afternoon of fishing (see photos).  They were not large fish, but they were very active.  Hopefully, they will continue to cooperate since I plan to fish river currents all winter long.
Posted by Dave Pickering at 3:47 PM 1 comment:

Things have suddenly slowed down on the carp front.  I've blanked two days in a row and have seen no activity.  Water temps are now in the upper 30's and skim ice is forming at night in close to shore and in puddles.  The end of pond and lake fishing is near here in RI. Credit the cool weather of the last few days and the cold nights in the 20's for the slowdown.  In the past I have not  been able to catch carp when the water temperatures in ponds and lakes drop below 38 degrees.  Rivers currents are a different story.  If you can find deep, moving, oxygenated water that holds fish, they will hit just about all winter long.  The challenge is finding these spots.  In most rivers, it's like looking for a needle in a haystack in 30 degree weather. So, I'm not quite ready to give up my pond and lake fishing, but I'm realizing that barring a heat wave, the end of the season is near.
Posted by Dave Pickering at 1:09 PM No comments: 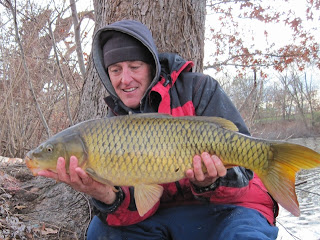 This is the best first half of December I have ever fished for carp here in RI.  I have been mainly focusing on the northern part of the state and catching fish in multiple spots. Other members of the RI Carp Anglers Group are also reporting good carp fishing in the eastern part of the state and the central part of the state. To give you an idea of how good it is, consider in the last three days I have landed 16 carp from 5-14 lbs.  Those would be very good numbers in mid season, unheard of in December in RI.  The fish are active.  I have seen fish jumping and I have seen bubble trails in a number of locations.  I'm also catching in the morning, mid day and even after dark.  My biggest in the last few days came at 8 o'clock at night when temps were only in the thirties, but the fish were still hitting.  My hot bait continues to be pineapple flavored sweet corn, although I know others are catching them on unflavored sweet corn.  Enjoy this hot December fishing while you can because I assure you the end will be coming soon.
Posted by Dave Pickering at 6:29 PM No comments: 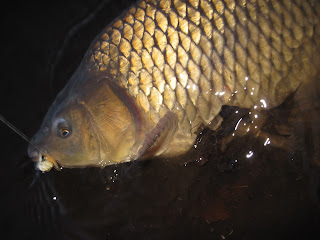 At this time of year I am hoping to catch a fish or two.  A good outing would yield one carp, any size.  After all, this is December and many people say carp are not supposed to hit at all in cold water.  Well, I'm not sold on that thinking as I have taken decent numbers of them in December in years past.
On this day after the big storm, everything was wrong.....cold with wind chills in the low 30's, very high water, big winds and leaves and debris all over the water. However, the carp were on a rampage.  In a little over two hours, I landed 8 commons, my best December outing ever.  I had no big ones, but I did land all scrappy 4-6 lbers.  These fish were aggressive and from the screaming alarms, you'd think they were on an early fall feeding binge. All the fish were caught on pineapple flavored Pescaviva (sweet corn) fished ahead of an oatmeal based method ball.
Posted by Dave Pickering at 5:59 PM No comments: 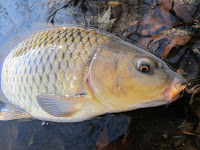 I hit a real milestone today as I landed my 700th carp for 2011.  It is the most carp I have ever caught in a single year, surpassing the 645 carp that I landed in 2009.  This has been a great fishing year for me with loads of very large fish, several record breaking fish and big numbers of them.
I must say that getting that 700th fish was a chore.  It has been great carp weather in the last few days but the carp have generally been uncooperative.  In the last three days, I have been able to land only two fish, and that's about 15 hours of fishing. And, these were not headline fish with both commons going only 6-7 lbs.  Not great, but hey, it's December 7, and last year at this time, pond and lake fishing was over with ice forming on the ponds and snow on the ground.  With this year's warm weather, I predict I have at least a couple of more weeks of fishing.  It will probably be slow going, but there are still fish to be had.
Posted by Dave Pickering at 6:15 PM 2 comments:

Still Worthwhile if you can Stand the Cold 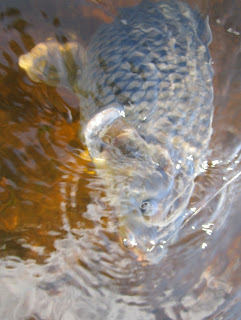 I got out yesterday morning.  The wind was howling from the north and the temperatures were in the high thirties and low forties.  It was cold.  However, the carp were still hitting as I managed to land three fish.  Realize that water temperatures are still quite warm for this time of year so the carp are still active. We have had no unusually cold weather at night so I suspect this fishing should continue to hold up until severe winter weather and the ice arrives.  If you are planning on fishing in December, keep in mind the tactics I outlined in the last post. That's what has been working for me.
Posted by Dave Pickering at 5:49 PM No comments: