I've had a bad three days of carp fishing.  In that short period I landed only one fish. There's a number of factors related to the heat that I believe have greatly slowed the fishing in the places where I've been trying.  I was hitting my spots known for large fish and getting nothing. Large carp, in particular, seem to go into a funk in this summer heat.  Smaller carp seem to be more active.  So, yesterday I completely switched gears and headed to some of my smaller spots that have more fish but smaller fish.  That did the trick.
I fished yesterday evening with my friend and fellow RI CAGer Nick.  We fished this quiet little spot using maize on the hair rig.  We landed a total of 6 carp in two hours.  We also had a few more half runs and bangs on the rod tip (yes, could have been turtles).  While our largest fish was about 8 lbs., the action was very good considering what I had been doing.
So, my new approach is going after whatever is hitting, even if it mean targeting smaller fish.  I am guessing that until this weather breaks with some cold rain, the fishing for larger fish will remain slow.

Posted by Dave Pickering at 9:58 AM No comments:

Things are heading downhill, and the hill is steep.  The summer doldrums have arrived.  The water is warm, water levels are dropping and the weather is sultry.  The carp are just not active, particularly in the daytime.  It's a fish here and there in the morning and in the evening, but the numbers are way down compared to the beginning of the month.
What is super active in this heat these days are turtles...all kinds...snappers as well as sun turtles. In the last two weeks I have landed 12 snapping turtles and another half dozen sun turtles.  In addition, I have had another ten or so on before losing them.  In one particular spot I fished last week, the method ball would hit the water and within seconds, a turtle would be on it.  The sun turtles have an irritating trademark of being about to take the bait and even the hair stop right off the hair without even a twitch of the rod.  Occasionally, they get hooked. The snapping turtles are far more aggressive.  They will get into your bait and seem to get hooked most of the time in either the mouth or the foot as the rod tip keeps bouncing. These past few weeks have been the most active I have seen the turtles in years. Not good.


Posted by Dave Pickering at 6:27 PM No comments:

Grass not always greener on the other side of the fence....

I have been having marginal success here in RI for the past week since this warm weather arrived.  However, I was still catching a few fish.  So, yesterday I decided to try some "exotic" waters in MA in the hopes of hitting it big.  I went to the Merrimack River in northern MA and fished a couple of different locations.  Even though I was in some good spots where I caught lots of big fish in the past, I completely blanked.  In the seven hours I was there I did not have a hit and never saw a fish jump.  It was completely dead.  It just goes to show that in spots that you can not prebait you take a chance that it will be completely dead.
On the way home from the Merrimack, I hit a local spot that I had been prebaiting.  It would be dark in an hour, but I still decided to give this place a try. Within fifteen minutes, I had a nice mirror (see photo). Seven hours on the Merrimack and nothing, fifteen minutes in a spot close to home and a fish. This morning I decided I was not going far so I fished real close to home. In two hours I had 5 carp on the bank and lost another one.  Once again, this was a fishy spot that I baited and fished often so the carp stick around.
So, moral of the story here....the grass is not always greener on the other side of the fence. I do like going on adventures in some "exotic" spots, but sometimes fishing high percentage spots close to home does have its advantages.

Posted by Dave Pickering at 11:46 AM No comments:

In a Slowing Summer Pattern

The hot weather is here, and with it has come a slowing summer pattern of fishing.  Two weeks ago I was averaging eight or nine fish an outing (remember "100 Carp in Twelve Days" post).  Well, I am now catching 1-3 fish an outing and even blanking on some outings.  In addition, the fish are smaller with the majority going under 10 lbs.
So, this happens in summer.  With the warming water and water levels dropping, the carp get into a funk and are not feeding as heavily as in cooler water. In addition, the pests like turtles and horned pout are numerous.  For instance, in the last two weeks I have landed 11 snapping turtles and 2 sun turtles.  Awful!
But, realize there are still some fish to be had if you follow these few tips:
*Try fishing in the cooler times....morning, evening, and at night along with rainy days.
* If there are lots of pests around, try getting rid of the method ball.  Turtles make a B-line right for that ball.
* Use harder baits like maize, chick peas, boiles and tiger nuts. Avoid sweet corn.
*Continue to use artificials.
*Prebait if you can, though it will also bring turtles around.
*Get into moving water.  Fish in the rivers are much more active in the heat than fish in ponds.
* Try heading north.  Some of our guys have been doing real well in the Merrimack River, a hot spot in summer weather due to its cooler water.

Posted by Dave Pickering at 11:34 AM No comments:

As I moved the fish closer to the net, I thought I had a small common.  But, after netting and reaching in the net to unhook the fish, I noticed this was not a common carp.  In fact, it was not a carp at all.  It was a wild hybrid goldfish.  I had caught only a few in the past, and this certainly came as a surprise as it was my first of this year.
Wild hybrid goldfish look a lot like a small common, but there are differences.  First off, they have a straight mouth with no barbels under the chin.  Their scales tend to be smaller and really golden.  This one had a dark back, something I had not seen in the others I had caught.  They also tend to have specks of red or orange on their bodies.  They are quite beautiful. This one was about a foot long but real chunky.  In the past I have caught them up to about 4 lbs.
They hit the same baits as carp and can be found in the same waters.I suspect others have caught them and think they have a small common. 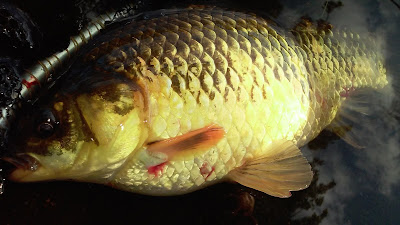 I hit the 400 fish mark for the year today. I am into one of the best summer streaks I have ever been on landing 100 carp in the last 12 days while fishing a number of locations.  In recent days I am getting most of my fish on combo baits of corn and artificials. I am still getting a few freelining mulberries.  Today I got out for a couple of hours this morning and got 2 carp on corn and 2 carp on mulberries. The fish went 6-13 lbs.

Posted by Dave Pickering at 6:59 PM No comments:

When Smaller is Better

I just finished one of the most successful Fourth of July weekends I have ever fished.  This is a tough time to get out.  There is lots of boat traffic, kayaks and canoes all over and fireworks going off. It greatly affects the carp fishing as the fish sense something is wrong and go into hiding.
So, the challenge for me was to find an off the beaten path spot away from a lot of disruptions.  I found just the spot and hung out there for four evenings without seeing another person or water craft. I didn't catch many big fish but I did find a lot of them.  I wasn't necessarily looking for big fish.  Most of my big fish spots were loaded with people so that was out.  So, I was happy to get a lot of action with carp in the 3-7 lb. range.  No monsters, but these were good fighters, and I used my light outfits to fish for them. Landed over 30 of them (combination of mirrors and commons) in the last four days using corn and artificials on the hair rig.
It was a very successful holiday weekend of fishing.


Posted by Dave Pickering at 7:14 PM No comments:

That terrific streak that I was on at the end of June has just continued into July.  In the last two days I have landed 22 carp, fantastic numbers for early July.  And, I've had some really good ones too that reached up toward 20 lbs.
I will say, though, I am in a transition period.  About half those fish were caught on mulberries and half were caught on maize and artificials.  The mulberry thing is quickly dying out as it always does in early July. I would say it has, at most, a few days left in some places.
The challenge this weekend will be to find one of those quiet, productive, out-of-the-way spots where there is not a lot of activity.  Carp fishing is usually not good where there is boat traffic, people swimming and disruption in general.  A lot of people will be out and about this holiday weekend.  Besides finding a quiet spot, think about fishing quiet times like early morning, late evening and nighttime.  Those times can also be productive.

Posted by Dave Pickering at 12:12 PM No comments: 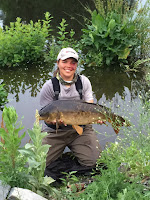 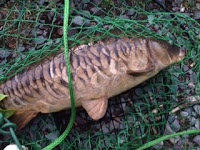 We have concluded our RI CAG Big 3 Tournament.  This has been running for the three months of April, May and June and was open to any CAG member.  The goal was to enter your biggest carp from each month and the weight total would be your points.  All the fish entered had to be caught in RI waters.
Once again, our members entered some real impressive fish.  We had two thirties entered, 12 carp over twenty pounds and a bunch of high teens. Medals were awarded to the top three finishers who are listed below along with their catches:

Congrats to all the winners as well as all those members who entered fish. 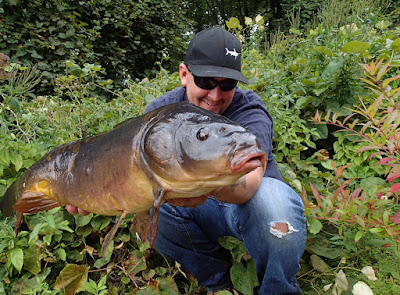 Posted by Dave Pickering at 1:38 PM No comments: