A Tough Week of Fishing

It's been a poor week of fishing. I am barely scratching a fish or two a day, even blanking on other days, and I am fishing a lot in all my early season hotspots. Other carp fishermen in RI are reporting the same results. I attribute this to exceptionally cold nights in the 20's shutting everything down. I am seeing fish sunning themselves in the daytime when the temperatures barely get above freezing, but they are not at all interested in hitting. They barely move, looking like statues in the water. A week of temperatures above normal will certainly get the fish in high gear. I just don't know when that will happen.
Posted by Dave Pickering at 6:30 AM No comments: 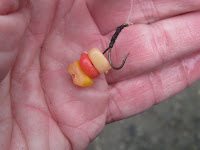 Even with the cold weather, this has been a big week of carp fishing for me as I am catching large numbers of mirrors. Much of the success is due to a change in tactics. The ticket has been to mix and match flavors and colors of sweet corn on the hair rig.
Rather than go with one flavor on the hair rig, I am using multiple flavors and colors. My best combination has been two kernels of pineapple along with one kernel of tutti-fruitti sandwiched in the middle. However, I am also doing well with one kernel of peach, pineapple and tutti-fruitti. If I go with one straight flavor like three kernels of pineapple, the results are not as good. I have seen this type of thing work real well in the past, and it's working real well right now.
Your time with sweet corn is limited. As soon as the water warms up and pests such as turtles, bluegills and horned pout become active, they will pick the delicate sweet corn apart.
Posted by Dave Pickering at 8:06 AM 3 comments:

This week I got a ruling from the RI DEM regarding designated trout waters in the RI section of the Blackstone River. In the past we were told that posted areas and designated areas listed in the abstracts (Lincoln and Cumberland) were off limits until Opening Day (second Saturday in April). Everything else was open. It appears that has all changed. I am now told that the entire Blackstone River from Woonsocket to Pawtucket is now designated trout waters.
There are lots of implications to all this for carp fishermen and for bass fishermen. First off, you can't fish any area of the RI section of the Blackstone River until after Opening Day. Secondly, corn is now prohibited year round in all areas of the Blackstone. You are also not allowed to chum.
We live in a state where the fishing rules seem to change by the year or even by the week. And, few fishermen even know the rules since they are not clearly stated in the abstracts.
But, alas, fishermen, you can still fish for carp in the MA section of the Blackstone where there are no restrictions that strangle your fishing. In MA there is no Opening Day rule, no corn rules and no chumming rules. And, I might add that there is better fishing there. See you in MA in the next few weeks.
Posted by Dave Pickering at 5:54 AM No comments:

One day it's 70 degrees and sunny. The next day it's in the 40's and cloudy. Two days later it's snowing and in the 30's. Get the picture. It defines March weather. It's not good for carp fishing as these fish are very sensitive to changes in their environment. This weather has led to an up and down month with one day offering good fishing while the next day there's not a fish interested in hitting. In a lot of ways, I think March is one of the toughest months of the year for carp fishing. More consistent fishing should be coming next month.
Posted by Dave Pickering at 2:29 PM No comments:

Know the Laws at this Time of Year

I had an interesting experience tonight as I was questioned by a DEM officer while fishing for carp. I was fishing the Blackstone Canal as I frequently do at this time of year. Apparently, someone called in the DEM to report me fishing in trout stocked waters. (No doubt it was a misinformed trout junkie (yes, lots of them around)) Of course, I was doing nothing illegal as the upper canal in Lincoln is not stocked with trout and therefore is not closed to fishing. I was also using corn which was questioned by the DEM officer. The corn thing was later cleared up by a DEM supervisor and I was cleared of any wrong doing. The DEM officer was very polite and apologetic, checked my license, wished me luck and was on her way. Just doing her job as all calls to the DEM have to be followed through.
So, here are the rules you need to know for early season carp fishing in RI:
1. Carp fishing is permitted in any places not stocked with trout prior to Opening Day of trout season. Opening Day only applies to trout fishing. There is a listing on the DEM site of all stocked waters.
Quote from abstracts:
1.1 The open season on all species of trout, salmon, and charr shall close annually
on the last day of February at midnight and shall commence at 6:00 AM on the
second Saturday in April annually

2. The corn rule states that corn is illegal to use in trout stocked waters
Quote from abstracts:
1.9 The following activities shall be PROHIBITED:
a. Using corn for bait in any designated trout waters

Know the rules if you are fishing at this time of year. Uninformed people may be watching and phoning the DEM.
Posted by Dave Pickering at 5:39 PM No comments: 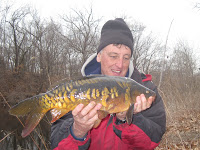 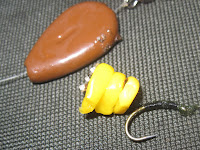 Conditions were all wrong today with cold winds, temps in the 30's and snow flurries in the air, but the fish were hitting once again. Landed a combination of mirrors and commons. Got all my fish today on pineapple flavored sweet corn on the hair rig (see photo). We're in full spring mode in some spots right now. 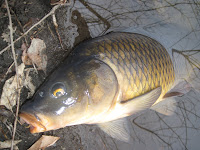 Fish the Warmest Time of the Day

Had an interesting day of carp fishing today. Started out this morning and fished from about 10:00 to noontime. I got nothing but saw a few fish moving around. I went home for lunch and then went back about 2:00. It was a different story in the same spot as the fish were now hitting. Landed 4 mirrors and a common on pineapple sweet corn (see previous video). It all proves that at this time of year when the weather and water are still very cold, the most productive time of the day, mid to late afternoon, is the best time to fish. This is the time period in which carp are most active. Of course, this will all change when the warm weather arrives, but for the next few weeks I plan to fish as much as possible during the warmest part of the day.
Posted by Dave Pickering at 2:27 PM No comments:

Making Your Own Flavored Sweet Corn 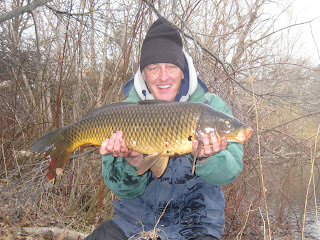 I got my first carp of the new year from a pond here in RI today. It was a good looking common of about 12-13 lbs. (see pic). I've actually had several hits in the last two days, and this was my first real taker. I have to chuckle when I read the Fisherman magazine reports today that said nothing was going on in freshwater in RI. Ah, what they don't know!
Most of the ponds south of Providence are all open and fishable. North of Providence the ponds remain locked in with ice but shorelines are deteriorating. Looking at some warm weather on the way, I think everything will be fishable by the weekend.
Note that trout ponds remain closed to any type of fishing until Opening Day. You need a 2011 license if you plan to fish at this time.
Posted by Dave Pickering at 3:11 PM 2 comments:

I went around this afternoon checking a few places and found that last night's storm and windy weather really opened up some ponds. Little is open north of Providence. Scott's Pond, Ryco and the Bike Path Canal are still locked in with ice and completely unfishable though open spots are showing along the shores. The Blackstone is very high and unfishable. South of Providence is opening up big time. Roger Williams Park is fishable with still a bit of ice in some spots. Mashapaug is fishable though about a third of the pond is still ice, mostly on the eastern shore. Spectacle is fishable at the back end. It still has ice at the south end of the pond. I suspect the ice will leave all the places south of Providence by the end of the week. The places north of the city should be fishable next week. Within the next few days I expect to catch my first carp in the ponds of RI. We are a week to ten days behind what happened at this time last year.
Posted by Dave Pickering at 2:48 PM No comments:

I have been scouting around the last few days looking for places to fish. Nothing is available. At this time, the Blackstone River, the only open water, is incredibly high and fast. It is not fishable. I checked out the Blackstone Canal and numerous ponds, and they were all iced in. In fact, I spent two days this week ice fishing at Stump Pond in Smithfield where there was at least 10-12 inches of ice!
Last year at this time I was fishing several ponds that had completely open water. Not this year. This is already a late start and I suspect we are a week to ten days away before some of the ponds open up to fishing. I keep telling myself spring is on the way.
Posted by Dave Pickering at 5:48 AM No comments: