This has been a blistering month of fishing for me.  At this point I have 175 carp for the month, far surpassing any October I have ever seen.  That has boosted my yearly total to 780 fish.  This makes 2015 my personal best year numbers-wise.  Last year I had landed 749 carp according to my logs, and that was my previous best year.  With two months to go (yes, I do plan to fish right until the end of December), I can't guess what the total will be. A lot will depend on the weather.
Yesterday was a real hot day of carping for me.  With bad weather on the way and the barometer dropping, the carp were in a feeding mood.  I landed 20 fish with many going over 10 lbs. In a month of hot fishing, yesterday's outing was one of my best days of the fall.

Posted by Dave Pickering at 4:30 PM No comments:

Zooming Past 700 Fish; Record Year in the Making!

I am on a feakin' fall roll like you would not believe.  Already October has been a record month for me with 110 carp on the bank, and I have a week of fishing left. Today, my numbers on the year zoomed past 700 fish for 2015.  At this point I have 715 fish.
My all time record numbers-wise is 749 fish for the year and that happened last year.  With a little luck and going on the pace I am on, I might even reach that by the end of October.  And, I have two full months to go. Years ago I would have told you 800 carp on the year would have been humanly impossible for me, but that number is reachable with a good November and December.
I have been moving around and fishing a number of spots, all generally places I have not fished before or places I have fished at different times of the year in the past. They have all been producing.  I seem to be catching an equal mix of commons and mirrors. For instance, I got out this morning and banked 9 commons and 9 mirrors. Interestingly, I have gotten nothing really large (over 20 lbs.) on this good streak, but my average fish has been over ten pounds. Earlier in the month I was catching good numbers of 20's but less fish.
At this time of year I fish saltwater more than freshwater.  The numbers are stacking up with a minimum amount of effort as I am putting in about 3 hours a morning.
The top bait for me has been sweet corn on the hair along with an oatmeal based method ball packed around the sinker up ahead of the bait. I am using no flavoring, a trend that I have continued with most of the year.


Posted by Dave Pickering at 1:53 PM No comments:

For me, carp fishing has been as hot as it gets at this time of year. I am on a fall roll, landing 40 carp in the last 4 days. And, I have not fished a whole lot, mostly fishing for about three hours in the morning. After those cold days last weekend, the fish have become super active in the warm days that followed. Most of the fish I have been catching have been decent size, running 8-17 lbs.  I have gotten no twenties, but I am not complaining.  At this time of year, a teen fish is a good catch!
One change I have made in my fishing is the return to sweet corn for bait. The cold snap has made the pests dormant and the sweet corn has been far outfishing the maize when I have used both baits.
Another change I have made is that I am exploring and fishing a lot of new spots.  Carp fishing involves a lot of exploring, and when you stumble on something hot, as I have, you generally have fantastic fishing all to yourself.  I have been fishing "off the beaten path" this week and really scoring.


Posted by Dave Pickering at 6:29 PM No comments:

RI Carpers are leaving a mark, a big mark, on the New England carp fishing scene.  Yesterday many members of our RI CAG group went up the the Merrimack River in Lowell, MA, to fish in a tournament sponsored by the Wild Carp Group of New England.  It was a marathon 18 hour event with big cash prizes and featured anglers from all over the northeast. Two guys fished together as team. The final results will show the RI guys SWEPT the winnings taking the top three awards as well as the Big Fish award. This was a catch and release tournament.
Bob White and Rob Clarke (dual member in RI and NH) took the first place prize of nearly $500 along with other prizes for their fish that weighed 34 lbs., 15 oz. Both these guys are very accomplished carpers and two of our best fishermen in RI. Rob is also the State Chairman of CAG in NH.
Sam Morgan and KJ Miller took the second place prize of $230 along with the big fish award of $100.  They also won several gift certificates. New RI CAG member Sam Morgan landed the biggest fish of the tournament at a bit over 17 lbs.
Jake Ayotte and Tom Perron placed third and won over $100 in cash and gift certificates.  Both are first year members of RI CAG and both are highly dedicated carp fishermen who are on a fast learning curve.
I want to also say that I have fished with all these 6 guys that won this tournament.  I am proud to say that these guys are all very dedicated, very conservation minded and treat the fish with the utmost of care. All of these guys deserve a big CONGRATULATIONS for their accomplishments. It is the start of big things to come!

Pic of the Week


Posted by Dave Pickering at 3:56 PM No comments:

For our RI CAG (Carp Angler Group) members, there are three contests/tournaments going on right now.  Here is a summary:
1. RI CAG Fall Combo Tournament- This is for RI members.  Idea is to enter your biggest common and biggest mirror by length.  That is your points. It runs until the end of Nov.  Current co- leaders are Jake Ayotte and Tom Perron with 63 1/2 points. Medals for the top three finishers.
2, CAG Discovery Month-  This is a contest run by the national group.  The idea is to find a body of water where carp have not been caught and write a story with photos about your discovery.
3.  CAG Fall Big 4 Tournament-  This runs the month of October and the idea is to enter your top 4 fish by weight. Prizes for the top ten finishers. Also, prizes for the biggest mirror and the biggest common.  Some of the best carp fishermen in the country are competing in this one. RI CAG members who are competing include Todd Richer, Tom Perron and myself.

Posted by Dave Pickering at 6:03 PM No comments:

Our national CAG was running a Discovery Month contest this month.  The idea was to discover a spot where no one has fished before and to catch a carp there and write about it.  I used my kayak as a means to get me into a place that had no shore access and was impossible to fish unless you got there by boat.  I paddled a good distance to the location and then found a place to set up on shore and fished there. I ended up finding a good spot and catching some good numbers of mirror carp up to 14 lbs.
When you think about it, a kayak is a stealthy craft that will get you off the beaten path and into some out-of-the-way locations.  There are tons of places in lakes and along the Blackstone River in both RI and MA that would be ideal to paddle to.  In low water such as we have now, it is easy to land a kayak and fish. I'll bet in many of those spots, the carp there have never seen a bait.

Posted by Dave Pickering at 5:53 PM No comments:

Holy Smokes....TAKE A LOOK AT THIS!

When that alarm goes off in darkness of night, you just never know what is at the end of your line.  Such was the case last night when I landed this exotic carp- like fish. At this point no one on the CAG Forum (lots of experts there) seems to know exactly what it is.  It had a turned down mouth like a carp. It had no barbels.  It had a beautiful gold streaked fan tail.  Its fins under the belly were huge, almost the size of my hands.  They were white with gold streaks. Overall it had gold and white scales like a common carp. And, its shape was odd...almost oval. It weighed about 7 lbs.
The thought out there is that it is some type of hybrid.  Whatever it is, it was gorgeous. 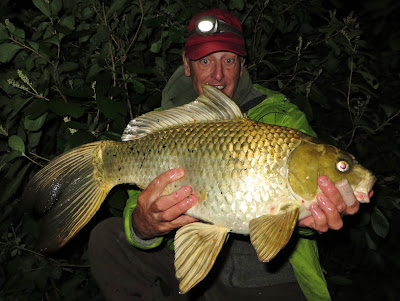 Posted by Dave Pickering at 6:25 AM No comments: 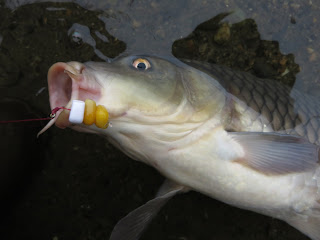 In the last few days of lousy weather I have caught a lot of carp and a lot of big ones.  ALL of those fish have been caught on the same bait..... two kernels of maize combined with a kernel of white, floating, artificial ESP corn which acts as a pop-up to my baits.  This artificial gives the bait some lift, something the carp find appealing when nudging a bait.  The pop-up makes a big difference in your bait and often separates those who are catching and those who are blanking.
Color is an interesting thing in carp fishing.  Back in the spring I was using a lot of pink and orange artificials in combination with sweet corn or maize.  Those were hot colors for spring carp fishing.  Yet, it is the white that is working best for me this fall. I've seen this pattern in other years where certain colors work better than others in different seasons. I've noted this fall that if I am fishing two outfits and one has an orange pop-up and one has a white, the white is getting far more fish for me.
So, carp fishing is constant experimentation to find what catches best.  Right now it is the WHITE pop-up in combination with maize.


Posted by Dave Pickering at 1:37 PM No comments: