Putting it Into Practice 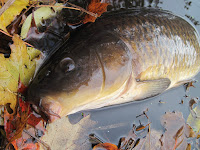 I decided to practice what I preach. Went out yesterday and fished the cold water strategies exactly like I described in my previous post. I was fishing a small pond. The result......7 carp in an hour and a half, by far my best day this month numbers wise. 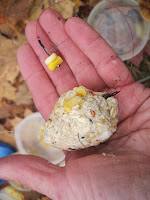 I used small hooks, small method ball, and sweet corn. Here's something interesting. Flavored sweet corn was not working. I tried several kinds. I got all my fish on unflavored sweet corn. I tried the flavored stuff with no luck, proving my point (that I've said in the past) that sometimes the flavored stuff works well, but sometimes it is a major turn off. Regular maize was also not working. One more note. I had to use a small method ball. The corn alone would not do the trick! 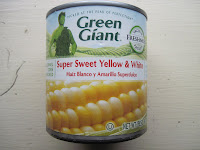 If you are looking for some quality sweet corn to use, try Green Giant, Super Sweet Yellow and White sweet corn that can be purchased at Stop and Shop. It is durable and very effective. It is the only unflavored sweet corn I will use.
Posted by Dave Pickering at 6:51 AM 1 comment: 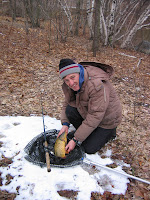 We're in mid fall and heading toward cold weather. It's just about time to start developing a cold weather strategy for carp fishing here in RI. Time to THINK SMALLER!

I especially like to fish small ponds in the cold. Small ponds are far easier to find carp and offer more consistent fishing. In large ponds carp tend to congregate in certain spots in the cold and those spots are often difficult to find because of the size of these big waters.

It's also a time to go smaller at the terminal end of your line. November carp are not the voracious feeders that they were back in June and July. They will pick at your bait, bump it and move it around, tactics that will drive a sane fishermen nuts. Screaming runs are not the norm. I will go with smaller hooks at this time, replacing my #6's with #8's. Cut down on your hair length to accomodate smaller baits. I might go with one or two kernels of sweet corn on the hair rig or maybe a small doughball. Hooklinks should also be shorter. I also tend to use smaller egg sinkers in the quarter ounce range. Finally, cut down on the size of your method ball. Instead of that tennis ball size method that worked so well in the summer, cut it down to the size of a ping pong ball. Consider eliminating the method. Using two rods, I might use one with method, one without. 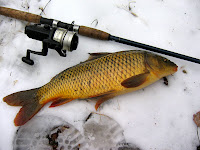 Timing is also important in cold weather. In late fall and winter, I tend to fish the warmest part of the day. That time period from early afternoon until dark has produced well in the past.

Until last year, I was on a 24 month roll, catching a carp every month of the year in open water for two years straight. Yes, carp will continue hitting in cold weather and water, but it is time to adjust your strategies to a cold water approach.
Posted by Dave Pickering at 6:05 PM No comments:

We are in a lull right now. As I type this, the temperature outside is in the thirties. With the water cooling rapidly, the carp are not as active as they were a month ago.
All of our RI CAG members are asking why the fish are not hitting so well these days. Here's a few thoughts about late fall fishing. This is no longer July. You can expect to catch far less fish, but remember that there are still fish to be had. At this time of year, I like to start hitting small ponds where the fish are easier to find and easier to catch. It is also a time to go delicate. Kev Wasliewski, the former CAG state chair in RI, would always give late fall advice to go smaller with the bait, smaller with the sinker, smaller method balls, go with sweet corn rather than maize, etc. This is a guy who could really catch at this time. Expect a lot of "taps" rather than screaming runs at this time. The fish's metabolism is slowing with the cold water and the hits will be picky at best. I will also use doughballs a lot at this time. They seem to like this soft bait and the pesky fish like bluegills that often steal this bait are inactive in cold water. Finally, adjust the times you fish. Last year I did really well in late fall during the warmest part of the day....from early afternoon to sunset.
The end is not nearly in sight. I keep extensive records or logs on my carp fishing. Last year I caught my last carp in open water in RI on Dec. 29. I had several days in December with upwards of 8 fish in one outing. I also landed many fish from the teens to 20 lbs. in November and December. So, things are not over by a long shot. We are just in a lull right now.
Posted by Dave Pickering at 6:53 AM 1 comment: 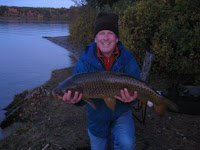 It's fall and it's big carp time here in RI. Many PB's have been landed by RI carpers this fall. While we've seen the mirrors in the previous post, our guys are also landing some big commons also. Paul Bazzoni, one of our newest RI CAG anglers, landed a PB common of 18 lbs. (see pic at right) fishing on a cold day. Tom Maguire, one of our veteran anglers, landed a common of 23 lbs. recently also. These are some big fish by RI standards. Great job, guys and terrific fish for fishermen who have been carp fishing just a short amount of time. Those RI Carpers REALLY know how to fish!
Posted by Dave Pickering at 6:39 AM No comments:

Mirror PB's (personal best) have been landed by RI CAG members lately. These are some big carp that are bein

g caught in parts of the Blackstone River, the mirror epicenter of New England.

Jeff Allard, one of our experienced carpers, landed a 22 lb. mirror in late summer (see pic at left). It is the largest mirror ever recorded by a CAG member in RI and is listed under the CAG records for RI. Congratulations Jeff!

Dick Czarn, one of our new members, landed his PB, a nineteen pound beauty, recently while fishing with Jeff (see p 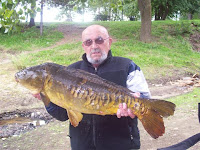 ic at right). Dick has been fishing only a few months but has really put in his time and effort and it is great to see that it is paying off with magnificent fish like this.

We have set up an informal network here in RI where our new members frequently fish with our experienced members, and it is really paying off! By the way, both these fish were released after the photos. The RI Carpers are committed to catch and release fishing and are very conservation minded!
Posted by Dave Pickering at 5:51 AM No comments: