I will be doing my carp fishing seminar, "Strategies for Trophy Carp" at two big outdoor shows in the next month. The show features a lot of how-to info on fishing for carp in southern New England. My schedule and links to the shows are below:

Sat, Feb.7,  5:00 PM- New England Fishing and Outdoor Expo, Holiday Inn, Boxborough, MA.  This is the same show that used to be at the DCU Center in Worcester.  It has now moved to Boxborough, MA. This show is packed with exhibitors and seminars and features everything you might want to do in the outdoors including fishing! The link to the show and all the info you need is here: NE Fishing and Outdoor Expo.Sat., Feb. 21, Time to be determined (Check website)- Spingfield Sportsmens Show, Big E, Springfield, MA.  This is a massive show also devoted to the outdoors.  It is heavy on fishing as well as hunting and it, too, features a packed seminar schedule.  The link to the website is located at Springfield Sportsmens Show.Hope to see many of my followers at these shows!
Posted by Dave Pickering at 10:36 AM No comments: 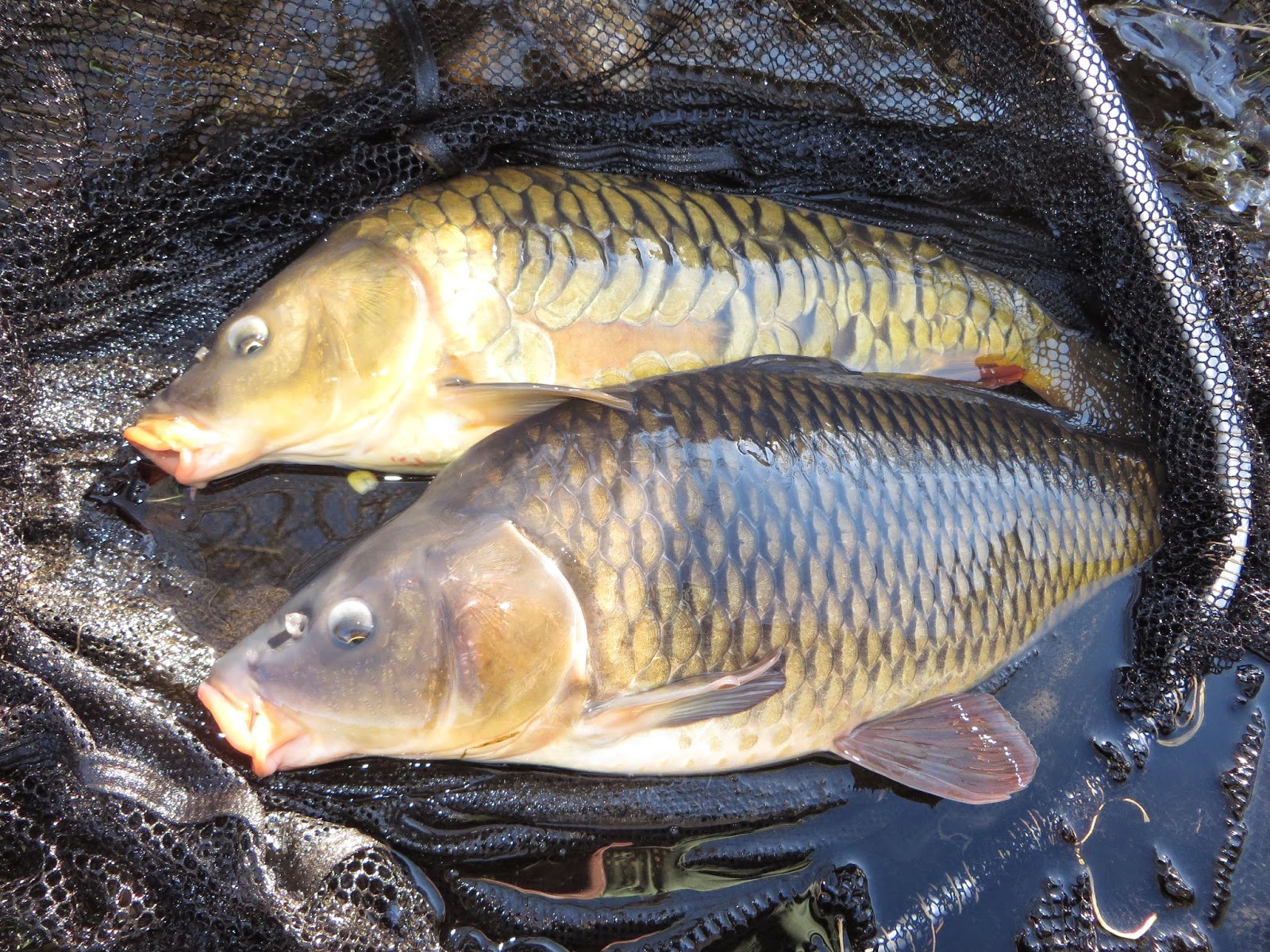 Posted by Dave Pickering at 5:41 PM No comments:

On the Water TV....Monster Mirror Carp of the Blackstone....this Sunday!

On the Water TV will be presenting the fishing show we did last spring called Monster Mirror Carp of the Blackstone.  It will run on Comcast (SportsNet New England) this Sunday at 10:00 AM. It will also air on Friday at 12:30 PM.
I went out this past spring with a film crew from On the Water.  Fellow RI CAGers Jack Sprengle and Erich Medenbach also joined us.  I acted as the guide for the host of the show, Chris Megan. Our goal was to have Chris tangle with a big mirror.  I'm not going to give away what happened....you'll have to see the show to find out!
If you don't get Comcast, the show is often repeated online at On the Water TV .
The preview video of the show is below:


Posted by Dave Pickering at 2:48 PM No comments:

I'm back on track after a two and a half week absence from carp fishing.  This weekend's warm weather and rain wiped out a lot of ice in the places I fish and I was able to fish my spots once again.  And, just like I left it a couple of weeks ago, the fish were still there.
I landed a modest 4 carp and had two other fish on.  Not bad for a January day with temperatures in the low to mid thirties. All the fish were taken on sweet corn fished off a hair rig.  I was using small, #8 hooks.  My sinker was a 1 1/2 oz. homemade flathead.  That sinker was bigger than I wanted to use but was needed to hold bottom in the swift currents as a result of the recent rains.
Make no mistake about it...CARP ARE TOUGH TO CATCH IN JANUARY.  They are sluggish and almost seem to be in semi-hibernation. You have to have everything right to catch fish at this time.  You need to be in the right spot with the right bait.  Your rig and terminal tackle has to be just right also. You almost need to finesse them into hitting.  If there is anything out of place here, they won't hit.  I was fishing today next to several frustrated fishermen who weren't catching.  They were in the right spot, they had the right bait, but their rigs were way off and that is why they were not catching.


Posted by Dave Pickering at 3:06 PM No comments:

Another RI CAG member has won Big Carp Tackle's Carp of the Month Contest for the month of December.  Todd Richer won the $100 gift certificate for a beautiful mirror carp (see photo below).  This makes 4 winners from our RI CAG for the year. Not bad for our small state of RI! Congrats Todd!
CAG membership certainly has its advantages as many of our members have won prizes and awards that far exceed the cost of their membership.  To join our national group, go to their website at Carp Anglers Group.
When you join the national group, you are automatically enrolled in the state group. The CAG frequently runs tournaments, photo contests, writing contests and fish-ins as well as connects you with a network of the best carp fishermen in the US!

Posted by Dave Pickering at 5:55 PM No comments:

We have two more award winning RI CAG anglers in the FFF (First Fishing Folly) that was held on New Year's Day.  Bob White, a new member in our club this year, won a second place award and $15 prize for his story about his fishing adventure in the FFF. The category was the "Jerome Adventure Tales".  Bob was a hardcore competitor who put in a monumental effort as he fished all night into the morning in the FFF. Bob also won a certificate in the FFF Sunrise Photo contest.  Our other winner was Todd Richer.  Todd took third place and a $10 prize in the FFF writing contest. He was another hardcore competitor who, despite a nagging cold, got to the water early and fished most of the day in subfreezing temperatures.
Great showing guys....you've made the RI CAG proud!
You can read about these awards on the CAG Forum under FFF 2015
Posted by Dave Pickering at 3:32 PM No comments:

To my surprise I had two winning fish in the First Fishing Folly  (FFF) sponsored by the Carp Anglers Group.  My first fish, a common landed at 10:30 AM, was a Hall of Fame winner as the 7th fish landed on New Year's Day.  That fish won a $10 prize and a beautiful certificate.  The other fish, my 8 lb. mirror,  won the "Scubadoc Mirror" award for the biggest mirror taken in the northern section of the US. In fact, it was the only mirror taken in the northern section of the country.  That fish won a $25 prize and a certificate.
Let me run through a few facts about the FFF.  The contest, which took place on Jan. 1, had over 60 anglers signed up to fish.  However, only 8 anglers all around the country scored any fish that day.  Those 8 guys landed 33 carp which totaled 315 lbs. in weight.  The country was split in half with fishermen in the northern zone and anglers in the southern zone.  Interestingly, no one in New England landed any fish other than the ones I caught.  I have to say the weather was particularly brutal that day with temperatures around New England mostly in the teens and low twenties.  It was even colder in other areas of the northern zone with our CAG anglers in Canada facing temperatures well below zero.
So, this all goes to show it's not easy to catch a carp on Jan.1, but as the results reveal, it can be done!

Posted by Dave Pickering at 3:15 PM No comments:

A Delicate Approach to Winter Carping

There are two critical adjustments you will have to make if you want to catch winter carp consistently. You have to be in the right spots, places where winter fish tend to bunch up.  You also need to the right approach.  Without both, don't expect to catch anything.
I'm not about to divulge the winter spots I fish.  Those have taken years, maybe decades to find and most of those spots are "small" off the beaten path spots that can fit one or two guys at most. Most of these spots have running water.  I can tell you that there are carp in every river system in RI.  My suggestion is to get out, prebait deeper river spots that have moving water and try fishing. That's how I found many of my spots.
I can tell you about my approach.  I have been experimenting with rigs this winter and have found the rig pictured below to be about the best I have used in recent rigs.  I first tie my hair onto a #10 hook using nylon thread while the hook in in a fly tying vice.  The rig is then made up with 10 lb. test monofilament line.  Make it long, 12-14 inches.  At one end is the hook, at the other end is a small swivel.  Avoid any excessive hardware.  A small 1/2 oz. steel egg sinker is my weight.  I also sometimes use a small method ball packed around the sinker. On the hair I use two pieces of sweet corn.  This is light and delicate stuff, but at times it is just the ticket to get fish that don't want to feed  to hit.

Competing in the FFF Tournament 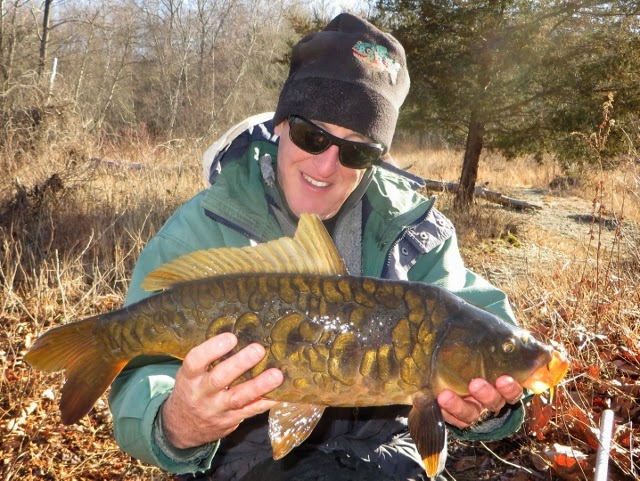 The national CAG organization runs a popular tournament every year on Jan.1.  It is called the FFF, or First Fishing Folly.  The idea is to get members all over the country to go out on Jan. 1 and try to catch a carp. There are prizes for the first carp caught, the biggest common, the most, the smallest, the biggest mirror, etc.  There is also a sunrise photo contest.  It is no easy task to catch a carp at this cold time of year, but you would be surprised to find entries from such cold weather spots as Canada, inland NY, and the upper Midwest to name just a few. Hundreds of carp fishermen from all over North America will go out and fish this tournament on this day. Yes, we even try here in New England.  In all the past years I have tried to fish in this contest there was only one year in which I was able to land one common.  Today I surpassed my previous best Jan.1.

Today was a particularly cold morning.  When I got to my spot the temperature was in the upper teens but it was sunny and I was dressed for it.  Many of my winter places were frozen solid so I had to fish a moving water spot where I met up with my friend and fellow RI CAGer Todd Richer.  I was using sweet corn on the hair rig and taking a "delicate" approach as I had described in the previous post.  After about half an hour of nothing one alarm suddenly sounded and within minutes I had a 7 lb. common on the shore.  Fifteen minutes later, it was an 8 lb. mirror in the net.  Fifteen minutes after that it was a 6 lb., 8 oz mirror.  And, that was it.  The action died and I got nothing for another hour and a half before calling it quits. Considering the air temperature and the rapid water temperature decline in the last three days (not a good thing), I was pleased with the results.  See photos of the two mirrors.


Posted by Dave Pickering at 3:09 PM No comments: