I've been steadily catching carp for the last two weeks here in RI, but what I lacked was a twenty pounder.  I landed a number of fish in the teens but that March 20 lber. had eluded me.  Until today.  I didn't get just one twenty, I actually got two of them.  Both were commons. I fished all day in some miserable weather, but if you can stand fishing in it, the rewards are often there.  Carp are on the prowl in nasty weather and today was no exception. Today's fish were caught on pop-up fake corn (orange) matched with a kernel of sweet corn.  This is has been my go to bait combo all month, and it worked terrific again today.
Right now the ponds are pretty much ice free.  Your best bet is to find some shallow water that warms up quickly.  It is those places where carp will be most active.  Also, places where the ice has been off the longest like ponds in the central and southern parts of the state are your best bets.  With flooding waters, river fishing is out right now.

Posted by Dave Pickering at 5:47 PM No comments:

Artificial Baits Lighting it Up

Artificial baits really lit it up this weekend.  I was out on Saturday and Sunday and landed 8 carp from 10-15 lbs.  The hot bait was a kernel of ESP, orange, buoyant, artificial sweetcorn (plastic) and a kernel of regular sweetcorn fished on the hair rig ahead of a method ball.  I also heard news of a phenomenal catch, a 31 lb. common, landed by the RI Dark Carper, Kev Wasliewski.  He was using the same bait to catch that monster.  His story and video are on his blog at  http://carpteamri.blogspot.com/
From Europe to the US artificial baits are hot baits right now and more and more of them are being developed.  At Big Carp Tackle (www.bigcarptackle.com ), the biggest US online carp store, you can find THREE PAGES of artificial baits that include plastic corn, artificial boilies, plastic nuts, foam pop-ups, plastic bugs, plastic bread,  etc.  Some are in bright colors that are super attractive to carp.  Some float, some sink, and some are even scented.  There is a whole industry out there that is producing this artificial bait because it works with amazing effectiveness.  Artificial baits are best used on a hair rig because they are hard plastic. If you haven't tried these yet, give them a try.  They are hot right now.

Artificial Sweetcorn Does the Trick Today

This morning I received an order I had sent in to the UK for some hard to get stuff.  In my order was some ESP "Big Buoyant Sweetcorn".  It was artificial, plastic sweetcorn.  But there were two things about this bait that made it special.  It was buoyant so it floated giving it some lift on the hair that the carp find so appealing.  It was also the right color with some of the kernels being red and others being a bright orange, two hot colors when talking carp bait. I've written a lot about how carp are attracted to bright colors.
So, I headed off with some of my new goodies and fished with a couple of young friends I had met in Lincoln last year.  I used my artificial sweetcorn in combination with the real stuff on one outfit and went with just real sweetcorn on the other.  The two carp we landed today, commons of 10 and 15 lbs., feel for the artifical stuff.  I suspect this will be a very effective bait for me in the coming weeks.
Posted by Dave Pickering at 6:19 PM No comments:

Can You Believe This? 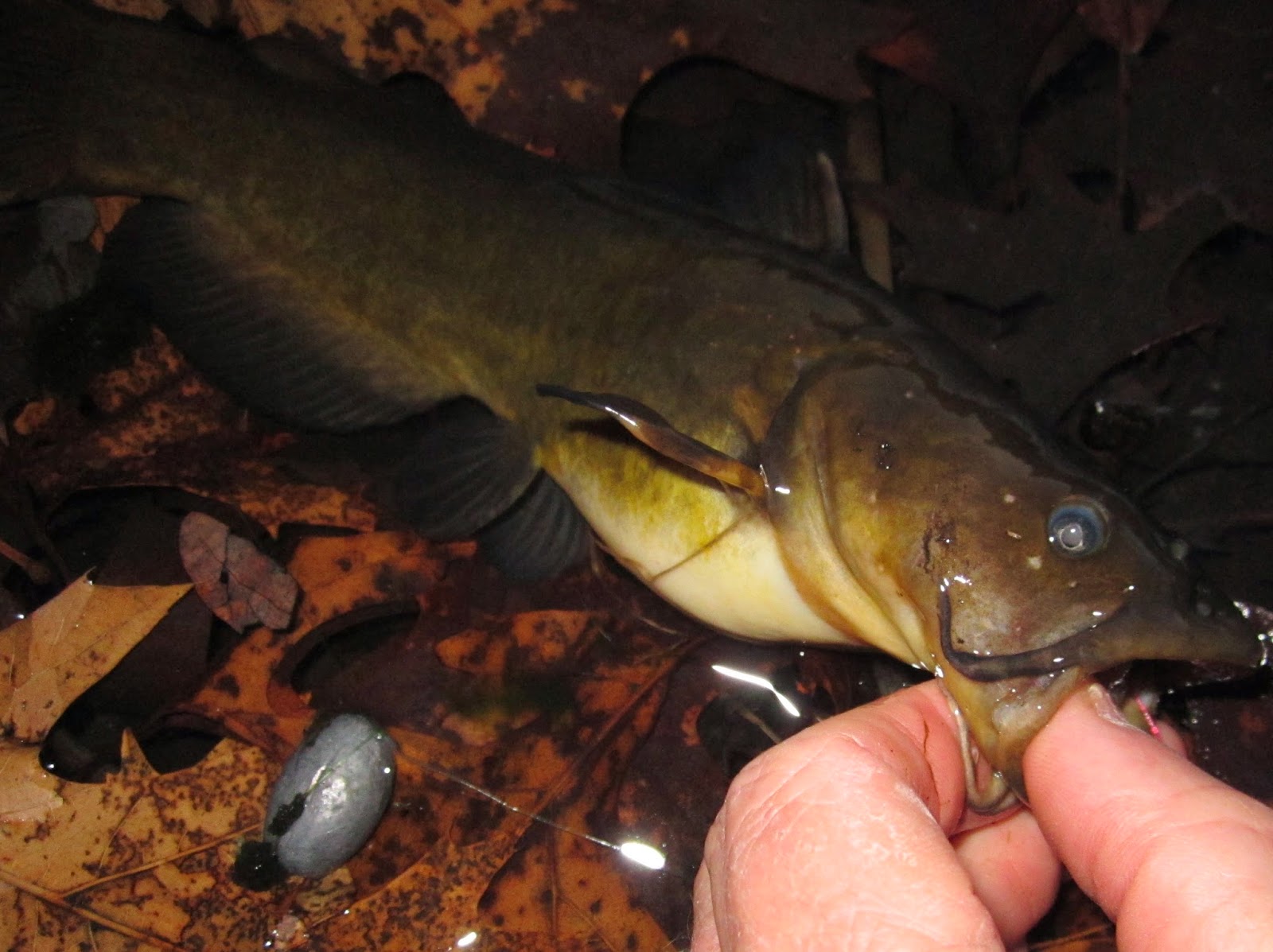 I'm fishing a pond today and there is some ice in coves and along shady shorelines.  The farthest thing from my mind is a pesky fish like bluegill or a horned pout.  They are supposed to be dormant, right?  Well, the rod starts twitching, and I think it's carp playing around with the method ball or the sweet corn I was using.  I have good reason to think that since I had landed a 15 lb. common about a half hour earlier.  The fish finally starts to run and I set the hook. Not a carp.  I know I have a small fish, but can it be?  Yup, the first pest of the year strikes, a horned pout of about 10 inches.  I never would have never guessed I'd get a pout before at least a month into the season when things start to warm up.  But, alas, here it is.  The pests know it should be spring.
Posted by Dave Pickering at 5:22 PM No comments:

It has taken a while to get there, but I have finally gotten my first pond fish for 2014.  In fact, I landed two commons today, a ten pounder and a fourteen pounder.  I also had on another decent fish that I lost to a snag.  All these fish were hooked on sweet corn fished on a hair rig with a small method ball ahead of the bait.
I have been scouting the state in the last few days looking for places to fish.  For the most part, ponds and lakes south of Providence are partially ice covered like the place I fished today.  Ponds and lakes north of Providence are generally totally covered with ice and unfishable.  I will also tell you that the ice is going fast as it falls victim to a warm sun at this time of year.  I suspect that by the weekend, a lot more water will open up.
Yes, spring fishing seems to be finally here and the action can only get better!  It's about time.

Posted by Dave Pickering at 5:05 PM No comments:

YOU'VE GOT TO CHECK THIS OUT!
This website, http://www.korda.co.uk/masterclass/ ,produced by Korda (big carp tackle company in UK) offers a series of videos on different aspects of carp fishing. Altogether they are called the Carp Fishing Masterclass.  Some of the titles include boilie fishing, float fishing, stalking, etc.  The videos, each about 15 minutes, are excellent and have a lot of relevance to fishing here in the US.  The European guys are the true experts on carp fishing in the world, and these videos highlight a lot of their proven techniques.  Looking for something to do on a lousy day or a boring evening....check it out.  You'll be amazed at what you can learn about this sport.
Posted by Dave Pickering at 2:36 PM No comments:

About a month ago, I wrote a post about how color matters to a carp.  In the post I cited a study which showed carp were attracted to bright colored baits such as orange, pink and yellow.  The post is here: http://ricarpfishing.blogspot.com/2014/01/does-color-matter.html
I am applying this concept to my own fishing, and it has worked like a charm this week.  In the last two outings, I have been using two types of sweetcorn....a bright orange colored tutti-fruitti and a dull yellow pineapple flavored.  I have caught a good number of carp this week on these baits, but here is the scoop.  The carp would only hit a combination of an orange and yellow kernel on the hair.  They would not take just yellow kernels and they would not take just orange kernels. I suspect they were attracted to the contrast and found that orange a bit of an eye opener.
﻿ If you go to online carp bait sites, you will see an increase in bright colored offerings from boilies to corn to artificial baits.  The colors red, pink, orange and yellow are quite prominent.  I will be using more of these color combos in the next season as that will be a major theme in my carp fishing this year.
Posted by Dave Pickering at 8:06 AM No comments:

It doesn't look like spring in my backyard, but from a carp fisherman's point of view, it's here when I can get my first carp in March.  And, that happened today.
Most of the ponds and non-moving water areas in the state are still frozen solid with upwards of a foot of ice and loaded with snow on the banks so I fished moving water today.  It worked like a charm as I landed two commons and a mirror (see pics of two of the fish) that went up to ten pounds.  The fish were caught on combo  baits (kernel of pineapple sweetcorn combined with a kernel of orange colored tutti-fruitti sweetcorn) fished off the hair rig.  Strange, but I had my best luck without a method ball. 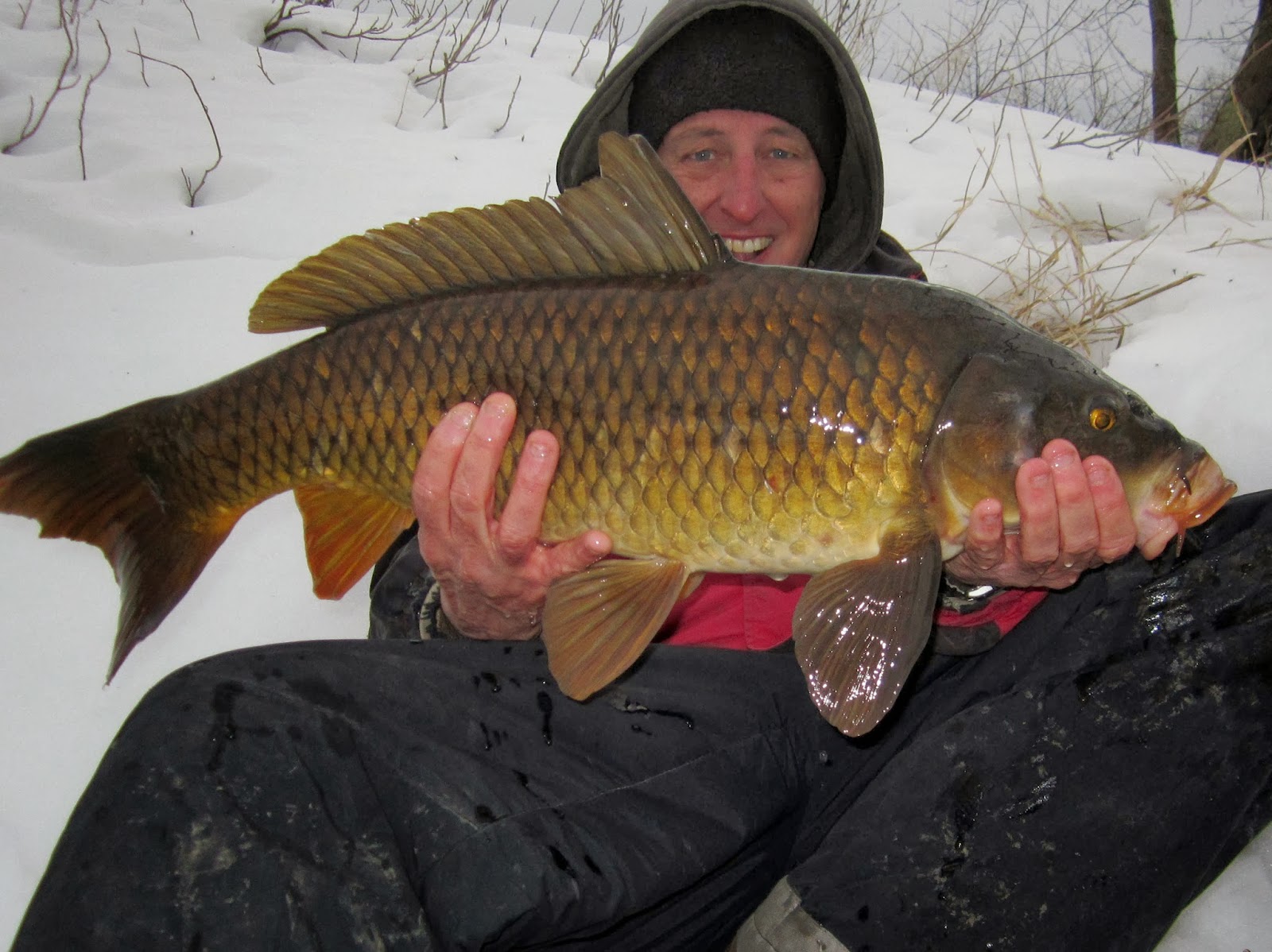 I will tell you that the fish today were sluggish.  They were sluggish hitters with a lot of taps and maybe a short run if I was lucky.  They were also sluggish on the fight, barely able to move on the way in.  This is quite normal when water temps are in the low to mid 30's as they were today.
So, for me the season has started, and I'll be back to my steady diet of carp fishing, especially on the warm days.  For anyone looking for a carp right now, your best bet is to hit moving and open water.  That can be in the form of a stream, a river or an area where a brook enters a pond. The warmest part of the day will be your best bet.


Posted by Dave Pickering at 5:02 PM No comments: