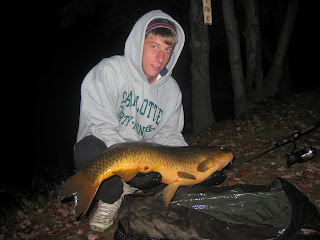 For carp enthusiasts, the window of opportunity is open. There is no better time of the year to catch a large RI carp than now. That widow will remain open for at least another month as large carp go on a fall feeding spree before cooling waters send them into dormancy.
It is not that easy to catch a large carp at this time of year. First off, they are wary feeders who often feed heavily at night. Not many freshwater fishermen are accustomed to fishing at night, so the hotspots are generally empty. Additionally, few ponds in the state have the real hogs. A “big hog” carp in RI tips the scales at over 20 lbs. with some super heavyweights weighing over 30 lbs. It’s a genetic thing with the big ones, so the biggest ones exist in a short list of places. Some well know big carp waters where I have taken fish in the twenties include Roger Williams Park in Providence, Lake Tiogue in Coventry, Olney Pond in Lincoln Woods State Park and Twin Rivers in North Providence. Finally, bait presentation is important if you are looking for a trophy. I like to prebait my spots using corn or doughball. I might bait up a spot in the morning and return to fish in the evening. When fishing, I will fish my baits (either corn or doughballs) on a hair rig, and I generally use an oatmeal method ball around the sinker as an added enticement. It’s all fished using bite alarms which are a must in total darkness because they have lights and auditory alarms which signal a hit.
The biggest RI carp I have ever caught weighed 27.5 lbs. It was caught on an early October night in total darkness. I have landed numerous others over 20 lbs. in September and October.
Hog Time has arrived. Get out and catch your biggest fish of the year!
Posted by Dave Pickering at 5:54 AM No comments:

What is Method Mix??? 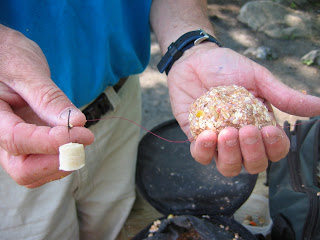 Method mix is a mixture of “chum” that is to be packed around your sinker or method feeder. When packed around the sinker, it is usually referred to as a method ball. Because of the ingredients it is made with, it is quite firm in a dry state and easily casted, but when completely wet, it breaks apart soon after hitting the bottom, leaving a circular area of chum with your hooked bait right on the edge. This really attracts carp to the circle of food on the bottom. As they begin eating, they find the hooked bait and soon will be on your line. It is a deadly way to fish and many of the sharpies who catch fish all the time are using method balls on a regular basis. Note that some people also refer to this a packbait. Some fishermen choose to pack it around their bait, rather than the sinker and thus, the name packbait. Below are some recipes that I have tried and that work well. More recipes can be found on the Forum on the Carp Anglers Group website. If you want to improve your catches, commit to using method mixes.

Method Mix #1- This is what I generally use as a method mix: 8 parts oatmeal, 2 parts cornmeal, 2 parts crushed up bread, 1 part particle added such as corn, flavoring (optional). Mix dry ingredients and then gradually add water and knead until you have a mix that will pack well. Be careful not to add to much water. Pack around the sinker and squeeze many times until firm.

Method Mix #2- 1 box (32 oz.) of Minute Rice, 1 (32 oz.) bottle of ketchup, particle handful (corn) of your choice. Heat the ketchup before pouring over the rice. Stir. Let it sit for an hour or even overnight. Add potato flakes or even oatmeal if too watery. Add a little water if too dry. Pack tightly around your sinker.
Posted by Dave Pickering at 11:22 AM No comments: