Posted by Dave Pickering at 10:08 AM No comments:

Back in the Groove


Posted by Dave Pickering at 3:15 PM No comments:

I was rolling along in late February and early March.  The record warmth charged up the carp into a late winter feeding spree like I have never seen before. In a two week period of record warm temperatures, I was able to bank nearly 100 carp.  I just knew it was too good to be true.
Then, we had three northeasters in a row (fourth one going on right now), loads of snow and plunging temperatures.  In many small ponds, the ice returned especially in the morning hours. All that rain and snow sent the rivers to high and fast moving waters. It all put the early season carp fishing into a complete reversal and a deep freeze. Since March 6 (last warm day), I have been out about a half dozen times and have managed to catch exactly one carp and one sucker.  I've seen no activity, no mud, no movement and no jumps. Nothing. It's as if everything just vanished.
This is yet another example of how the weather has a great effect on the carp fishing. Things will surely get better as spring continues to move forward, but it is looking like the rest of March could fish very slowly as very little warm weather is in the forecast.
Good luck if you get out in the coming days....you will need it!

Posted by Dave Pickering at 3:53 PM No comments:

You Can Now Join CAG Through Big Carp Tackle

For all those aspiring carp anglers and even for those experienced fishermen out there, you can now join the Carp Anglers Group (CAG) through Big Carp Tackle. Here is the website .https://bigcarptackle.com/
Here are some advantages to joining CAG.  You get into a network of state and regional carp anglers who are willing to share information with fellow members. CAG also has a whole slate of tournaments that are both national and regional. By joining the national group, you automatically become part of the state group.  RI CAG runs their own tournaments as well as fish-ins and other events.  You are also promoting carp fishing and conservation with this group. You also get the NACA magazine. And finally, by joining and paying the membership fee of $25 a year, you get a "starter packet" of goodies such as a magazine, a DVD, a hair rig , a baiting needle, sinkers, artificial corn and more.  Heck, just the starter packet is worth the membership.
My own experience with carp fishing began with joining CAG.  I met some great carp anglers and fished some terrific waters with them. I could never have figured this out without the help and advice of fellow CAG members. For me, it has really paid off.

Posted by Dave Pickering at 5:56 AM No comments:

Biggie of the Day 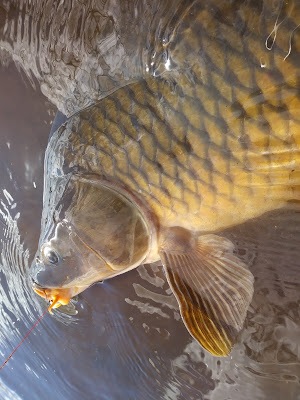 Posted by Dave Pickering at 11:42 AM No comments:

Like the weather, carp fishing has taken a dive. I got out a couple of days ago on the morning of the storm, and for the first time in a month, I blanked.
Now, snow covers the banks of most places in northern RI and MA that I fish.  There is even skim ice and a slushy icey mix on the surface of a lot of ponds.  River waters are so high they are not fishable. It looks like we are back to the realities of March fishing.  When temperatures in March are on the upswing, the carp fishing can be good.  When temperatures take a dive like they have in the last few days, the fishing dies out. As the weather goes, so goes the fishing.
It's not looking like a good weekend if you are hoping to catch a carp. On the other hand, the skiing is great.  So, looks like I'll be heading to the slopes this weekend!
Posted by Dave Pickering at 3:12 PM No comments:


Posted by Dave Pickering at 3:44 PM No comments:

Wind, Cold, Rain and Flooding Light up the Fishing in Recent Days

That record fishing that I experienced in February just continued right into March. Despite the wind, cold and torrential rains of the past few days, the fishing was excellent if you could stand it out in the cold.
Usually I don't like to fish flooding waters, but the fishing was so hot last week that I tried the past few days anyway. In some places the flooding was so bad that  I had to wear my waders just to get out of the flooded woods to cast. It all worked out because in the last three days of this messy weather I managed to bank 20 carp, fantastic numbers under any conditions. Many of those fish were up in the teens.
I've written many, many times about how carp are just charged up in nasty weather. Big rainstorms, tropical storms, northeasters and even hurricanes are all weather events that I have fished in over the years.  These events have consistently produced big numbers of fish as well as big fish.
The hot bait combination continues to be a combo bait of sweet corn and a white artificial corn fished off the hair rig. That is out fished anything else I have used and I have tried other combo baits.

Posted by Dave Pickering at 5:15 PM No comments:

Photo of the day...Fishing in the Storm


Posted by Dave Pickering at 6:00 AM No comments: