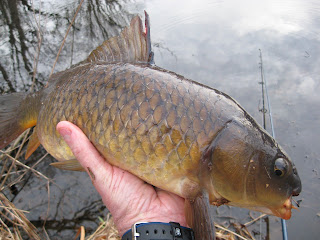 Dec. 11, 2008- It's a miserable day here in RI. Wind is howling, temperatures are in the 30's and it is raining on and off. I'm determined to go carp fishing, and I'm excited about the prospect of good fishing.
Just two days ago, most of the small ponds in the state were covered with ice. However, a big warm-up hit yesterday with balmy highs in the sixties that liquified the ice. I went carp fishing yesterday and blanked. In the past this was a common occurence that I attribute to the carp not used to an abrupt change in water conditions. It was always better a day or two after the ice left.
The small and shallow pond I am fishing is in East Greenwich. This place has a track record of producing in the dead of winter. I am using sweetcorn on short hair rigs, short hooklengths and small oatmeal method balls packed around a mall egg sinker. Small and lean are always better for finicky and sluggish winter carp. I casted out my first outfit and mounted it on a bite alarm. I am not even able to bait up the second outfit when the alarm screams off. I grabbed the rod and soon a five pound common was on the shore. The rest of the afternoon follows the same frantic pattern that is more like a Chinese fire drill. One alarm goes off, land a fish, another alarm goes off. Sometimes both rods are banging at the same time. It is terrific action, like I'm fishing the post spawn in June rather than the doldrums of December. My day ends two and a half hours later with ten carp landed, two on and lost, and at least another five runners that I missed. There were no monsters as most of the fished weigh 3-6 lbs., but they were some of the scrappiest winter carp I have ever caught.
Dec. 11, 2008- a miserable weather day, but it turns out to be a memorable carp fishing day.
Posted by Dave Pickering at 5:31 PM No comments: